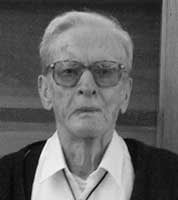 In loving memory of Goldwin Lewellyn Duxbury, “Goldie,” March 7, 1922-May 1, 2013. Goldie died peacefully on Wednesday May 1, 2013 at the Wikwemikong Nursing Home at the age of 91. Predeceased by his parents Alfred and Nena (nee Martin) Duxbury. Predeceased by wife Daisy and sisters Helen Duggan, Hilda and husband Owen Bailey, Freda and husband Norman Linstead and Madeline. Survived by sister Muriel Pyette of Espanola (husband Louis predeceased) and brother Irwin and wife Orpha Duxbury of Espanola. Remembered by his many nieces and nephews. The visitation was held from 7-9 pm on Monday, May 6 (a private family visitation from 6 pm). The funeral service was held at 11 am on Tuesday, May 7, 2013, all at Tehkummah Pentecostal Church. Burial at Fairview United Church Cemetery, Tehkummah. Donations to the Tehkummah Pentecostal Church appreciated.