SILVER WATER – With the purchase of about 18,000 acres of Vidal Bay property in Robinson and Dawson Townships by the Nature Conservancy of Canada (NCC), which is expected to lead to a shortfall in tax revenues for both unorganized townships that will have to be made up by local taxpayers, the provincial government needs to step up and provide some relief to the two townships, say local representatives.

That is the feeling of Algoma-Manitoulin MPP Michael Mantha, and local service and roads board representatives of both townships.

“This is exactly what we have been bringing up to the ministry (of municipal affairs),” stated MPP Mantha in an interview with The Expositor last week. “With the tax exemptions given to NCC on these properties, the government needs to recognize the loss in taxes to the townships’ budget. The province needs to step up and meet the shortfall for these townships. The NCC helps generate tourism dollars and bringing people to the communities.”

“The province either has to increase eligibility for these unorganized townships by making them eligible for Ontario Municipal Partnership Funds (OMPF) or make up the shortfall on the reduction they face in tax revenues,” stated MPP Mantha. “But so far we have received no response from the government on this, they only say they are reviewing everything and working on it.”

This issue was discussed at a Robinson Local Services Board (LSB) election meeting held September 12.

LSB Chair Tim Mackinlay first provided some good news to local residents in attendance at the meeting. “Esme Batten of the NCC indicated they wanted to help the (Robinson) fire department with the purchase of the bush buggy UTV,” said Mr. Mackinlay. “They are providing a donation of $3,000 and all we have to do is submit an invoice. This is a considerable amount of money.”

“Is this is a one-time deal?” asked Murray Duncanson.

Mr. Mackinlay replied, “this is a one-time deal. However, the NCC is prepared to help make up lost tax revenue for the local services board for both Robinson and Dawson.”

Mr. Mackinlay said members of the Dawson LSB and roads boards have asked MPP Mantha to help in this cause.

“The NCC has been wonderful to work with,” stated Mr. Mackinlay.  However, once NCC receives tax exemption status on the lands they purchased the next year potentially could be a tough year, especially for the road boards,” she added.

And with tax exemption status, “the NCC realizes it will be a fair hit for both townships and are working with the MPP and our local boards for a solution,” said Mr. Mackinlay. The Robinson LSB is expecting to lose between $5,000-6,000 (yearly) and the roads board will lose substantially more.

John Van Every, chair of the Dawson LSB, said that he and another representative of the board have been meeting with the NCC, MPP Mantha and government officials on the issue. “From the Dawson LSB perspective the impact is minimal, it will be the local roads boards that potentially will be impacted the most. I don’t speak for them.  But overall, the potential loss (in tax revenue) for Dawson and Robinson could potentially be significant.”

“The truth of the matter is that if someone in the government would get things together and use common sense instead of just worrying about policy, this whole thing would be resolved. The NCC is not the problem, getting the government to make changes to accommodate the situation would solve this,” said Mr. Van Every.  “We’re very aware of the affects tax exemption status will have and the impact it would have on our small community,” said Paul McAllister, chair of the Dawson roads board.

Esme Batten, program director, northwestern Ontario with NCC told The Expositor in an email September 17, “The NCC has been working very closely with representatives from both Robinson and Dawson Townships on topics like taxes at the Vidal Bay property. The NCC will be paying taxes to both the Robinson and Dawson townships local services and roads boards. There is some work underway to better understand funding programs that both communities currently benefit from. We are committed to continuing to work together closely with both townships to find the best way forward with a view to a successful outcome for everyone. Given the complexity of this topic and the uncertainties moving forward we cannot comment further at this time.”

“We are also pleased for the opportunity to support the Robinson township bush buggy with a contribution of $3,000 to the fund,” added Ms. Batten. 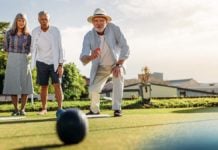