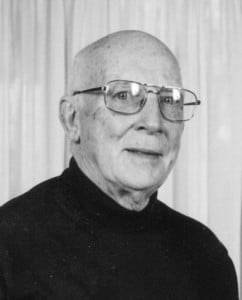 In loving memory of Herbert Wright, 81 years, who passed away at Extendicare York with his loving family at his side on December 20, 2011. Beloved husband of 58 years to Betty (nee Turnbull). Dear father of Wendy (Don) Longarini, Debbie (Jacques) Collin, Randy (Shelley) and Sharon (Randy) Colwell. Loving grandfather of Peter, Annie (Kevin Shawanda), Steven, Dean, Leanne, Carli (Scott ) Bowles, Sarah, Heather (Thomas) Johnston and John and great-grandfather of Logan. Herbert is predeceased by his parents Walter and Sarah (nee Bowser). Dear brother of Fannie Woods, Mary Long, Joan Stewart. Predeceased by Jesse, Ellen Sheppard and Maude Beck. Herb will be greatly missed by his feline friend Jack. Retiring in 1985 after 35 years at the Copper Refinery, Herb divided his free time between his home in Lively and his cottage at Lake Mindemoya. He was a community-minded man who coached baseball and ringette, was always building hockey rinks, was a volunteer at the Walden Fire Department and also a Waters Township councillor. Herb was an excellent gardener and an accomplished woodworker but more importantly he was a great husband, a great father and father in law and a great grandfather. Special thanks to the caring staff of the 5th floor at Extendicare York. Funeral service was held Friday on December 23, 2011 at the Providence Bay United Church with burial in the Providence Bay Cemetery. Visitation was at the Lougheed Funeral Home, 252 Regent Street at Hazel Street on Thursday, December 22, 2011 from 6 pm to 9 pm. Donations to the Providence Bay United Church or the Alzheimer’s Society would be appreciated.