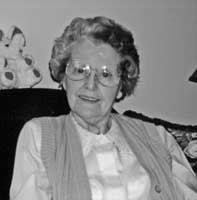 In loving memory of Hilda Maddox who died peacefully at the Manitoulin Centennial Manor on Tuesday, January 22, 2013 at the age of 87. Predeceased by husband John Joseph “Jack” Maddox. Survived by beloved daughter Linda and husband Vic Heath and grandson Anthony and wife Elisa. Hilda was born on November 4, 1925 to Ellen “Nellie” and Martin Catlow. She spent most of her early years and married years in Blackburn Lancashire, where she attended school in the Griffin area, and marrying her first love, Jack, on Christmas Eve, 1946. She and Jack lived in the Little Harwood area of Blackburn. Mum always had lots of friends and loved to enjoy their company immensely. She was never happier than when her grandson Anthony came to visit. In 1985, she came to Canada to live with her daughter and son-in-law, and grandson in Brampton, and once again made many friends, and was always on the go, singing and dancing, and socializing. She loved to sing, and was a member of the Choir in Brampton, where they played many venues throughout the year. In 2001 she moved once again to Mindemoya, and lived in Meadowview Apartments, where she once again made many friends. She will be remembered as a caring mother, mother-in-law and nan, and will be sorely missed. Hilda will be brought back to England for burial with her family. Online condolences at www.islandfuneralhome.ca.