MICHAEL’S BAY—The Michael’s Bay Historical Society (MBHS) is calling for assistance from Algoma-Manitoulin-Kapuskasing MP Carol Hughes and Algoma-Manitoulin MPP Michael Mantha for their help in preserving Canadian history it says is in serious danger of being lost forever.

“We’ve been having some trouble down there,” said Bill Wilson, a member of the cemetery committee of the MBHS. “There are five cemeteries with approximately 100 people in them and that property (in Michael’s Bay) is currently in control of the RCMP (Royal Canadian Mounted Police) since the people who had owned the property were charged by the Belgium government. The property was all confiscated and is in control of the federal public works command after the Belgium government confiscated the properties and asked the Canadian government to look after it.”

Mr. Wilson explained that the RCMP has a section of its branch that looks after the confiscation of property.

“And because of all of this the RCMP has control of the property and is not letting us on the property. The five cemeteries have not been maintained for many, many years. We as a group are even prepared to look after the property if they would let us.”

Mr. Wilson stated, “I had talked to an RCMP officer who, after he told me the RCMP is denying access to the property through the Township of Tehkummah, just hung up on me and I haven’t been able to get in touch with him again. Obviously as a group we need bigger guns around to get anywhere with the RCMP,” pointing out the society has about 40 members currently.

“The only way we’re going to get a response to our concerns is either through MP Carol Hughes, MPP Michael Mantha or if the press picks up on the issue,” continued Mr. Wilson.

In a prepared release Mr. Wilson wrote on behalf of the society, “the Michael’s Bay Historical Society is a group of people who have ancestors that lived in Michael’s Bay or near Michael’s Bay or simply have an interest in preserving Canadian history that is in grave danger of being lost forever. The fight to preserve this history of our pioneers is a daunting undertaking against several fronts that should be helping the historical society but at every turn are blocking the interests of the Society.”

“The local municipal government has in the past failed to protect the old township from desecration of its cemeteries and historical ruins even though they still retain ownership of the town streets. They have always been aware of the existence of the five cemeteries. Most of the grave markers are gone, one cemetery has a small fence remaining around the “Penny Baby” graves and the other cemetery still has the sign denoting a cemetery. Some years ago an archaeologist from Laurentian University visited the site and confirmed the cemeteries existence, but we have no written confirmation of these facts. The present municipal government passes off governing of the area to the RCMP,” the written statement reads.

“The present government is fully aware of the presence of cemeteries within the old town site and is unwilling to perform their duties in regards to maintaining the gravesites,” states the release. “The failure of previous governments to maintain its cemeteries should not prevent present governments from taking on the task. Every town of the Victorian era would have several religious denominations and each would have their own grave yards, Michael’s Bay is no different. This is within their mandate and should not be passed off to any other agency. The legislation states, “a municipality may order a cemetery owner who does not keep the cemetery in good order and repair to restore it to good order and repair. R.S.O. 1990 c. C.4,s. 59(1).”

Mr. Wilson, in his letter to the local MP and MPP, said “the RCMP should be looking after the rights of Canadian citizens, but seem to have their own agenda with regards to this property, allowing desecration of gravesites containing human remains, and preventing access to the gravesites by relatives. They seem to be more interested in making profits for foreign governments who at the present time have control of the property than allowing the relatives of our ancestor’s access to their graves for maintenance, visitation, or protection from vandalism.”

“It is the provincial government’s duty to assure the maintenance and access of cemeteries,” wrote Mr. Wilson. “The word of relatives and local citizens of the existence of these pioneer cemeteries is not enough for this agency to accept. They insist on an archaeologist’s confirmation of the existence of human remains. Within a town site of a Victorian Canadian town there would have been several churches of various denominations, each with its own cemetery and to deny the existence of these cemeteries or the descendants of those buried there is a travesty of justice. The Province of Ontario’s registration and compliance section is unwilling to assist our Historical Society efforts to rehabilitate and maintain these five cemeteries of nearly 100 graves.

Mr. Wilson said the historical society, “Wants to put fences around the cemeteries so they are not desecrated further and maybe put markers on the graves. I think a cemetery is a sacred thing, no one should be allowed to desecrate any of them.”

The Recorder was unable to reach an official with the RCMP for comment prior to press deadline. 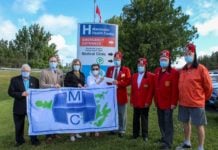 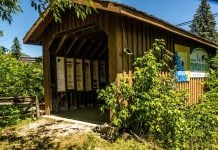