One of the longest surviving road races anywhere is the annual Wiky Road Race who turns a “nifty fifty” this coming October 16th thanks to Henry Hoy and Larry Leblanc who started the race way back in the day! The annual 10 km festivities will begin in Kaboni with the walkers leaving at 8:30 a.m., the youth runners leave at 9:00 and then the adults will hit the road at 9:30.

Race participants must pre-register before October 13 by emailing, Amanda Trudeau (amandatrudeau@wikyhealth.ca). From the 4-Corners in Kaboni the finish will be at Thunderbird Park in downtown Wiikwemkoong, As always there will be lots of prizes and age categories for: 10 and under, 11 to 13, 14 to 18, 19 to 54 and ‘seniors’ 55-plus.

It was way back in 2019 the last time the Island, Elementary 3-Pitch Championships were held and both the Junior and Intermediate teams enjoyed a beautiful day this past Monday after having been rained out last week.

C. C. McLean played host to the Junior event with the Assiginack All Stars capturing the Championship with an 8-4 win over the CC McLean Colts. Both teams finished the round-robin with 3 wins and 1 loss. In the deciding game it was a scoreless first inning, but in the second, CC McLean scored 3 runs. The Colts made it 4-0 in the third inning. The All Stars however, rallied with 4 runs in both the fourth and fifth innings to capture the Island Junior Championship Trophy! Congratulations to players (first names only at this point): Iris, Alannah, Ava, Joshua, William, River, Chloe, Tyler, Allie, Julia, Eli, Rex, Bryson, Chayton, Miah and Coaches Allison MacNeil and Cami Edralin!

Little Current had two teams in the tournament, filling in their rosters with some feisty Grade 4s! The Coyotes Team #1 finished the round-robin in 4th place, tied with Lakeview (2 wins and 2 losses). In the 3rd place final, Little Current scored runs in all 4 innings to capture third place overall with an 11-2 victory.

Meanwhile over in Mindemoya, Central Manitoulin Public School were the Senior hosts. Due to a scheduling problem, there was not time to get to the tie-break and the Little Current Coyotes and Mindemoya Eagles settled as co-winners! The Coyotes roster was not available at press time but their Coach, Tim Lockeyer will get it in for next week!

Next up for Manitoulin elementary sports is Cross Country, followed by Flag Football.

Rumbled on the Rock!

The Wiky Sons of Pitches started making up their fastball team in April as the guys haven’t played since before Covid shut everything down. Without an Island league this year, they decided to get into the N.S.F.L. “NORTH SHORE FASTBALL LEAGUE.” They messaged the commissioner of the league and at their meeting which Coach, Gerry Baibomcowai had to attend, the executive gladly accepted their squad although they played their home games in Espanola. There were five teams in the league: Sagamok Hounds, Sagamok Chiefs, Spanish Spirit, Blind River Bandits, and then, the Wiky S.O.P.

At the end of the regular season Wiky finished 1st in the league with 19 wins and 3 losses, and played the Chiefs in a best of three but beat them in two straight! Drawing the Hounds and beat them 3 games to 1 to win the league! One notable feature of the team was they had five sets of brothers, and a father/sons combo.

A good sport is good for sports.
chipstoquips@gmail.com 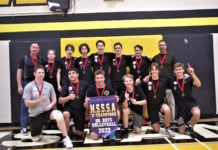