OTTAWA-Canadians watched political history unfold Monday—as voters across the country filed into polling stations and handed Conservative leader Stephen Harper the majority he had requested of them-but in the context of historical significance, the really big stories were the ascension of Jack Layton and the NDP to Official Opposition status, the near annihilation of the Bloc Quebecois, the first-ever election of a Green Party candidate to the house of commons and the relegation of the Liberal party to third-party status.

The rout of the Bloc began with the outstanding performance of Jack Layton in the televised French language debate and with the steady rise of NDP fortunes in La Belle Province, the excitement caught fire and an orange wave began to roll across the country-largely at the expense of the Liberal Party of Canada and their leader Michael Ignatieff. As the dust settled on election night, the NDP had captured 59 Quebec seats.

Some of the most storied names in the Liberal bullpen went down to defeat as fortress Ontario crumbled. Those names included several former contenders for the leadership of the Liberal Party as well as the party’s current leader Michael Ignatieff in Etobicoke-Lakeshore. Hockey legend Ken Dryden in York Centre, Gerrard Kennedy in Parkdale-High Park, Martha Hall Findley in Willowdale and Joe Volpe in Eglinton-Lawrence all found themselves rolled over by an orange tide along with their leader. Former Liberal leader Stephane Dion was handily returned in his St. Laurent-Cartierville seat, however, as was Bob Rae in Toronto-Centre. Liberal house leader Ralph Goodale held on to his Saskatchewan seat, and heir apparent Justin Trudeau also survived in the Quebec riding of Papineau. The NDP also defeated Bloc Quebecois leader Gilles Duceppe in his Montreal-area riding.

For NDP supporters, jubilation at their party’s historic rise was tempered by the sobering prospect of a Conservative government in Ottawa for the next four years. Still, the NDP sweep has been impressive, even Ruth Ellen Brosseau, the NDP parachute candidate in the Quebec riding of Berthier-Maskinongé, whose main claim to fame prior to election night was spending much of the campaign on vacation in Las Vegas, will be sitting in the house of commons for the 41 Parliament. The NDP claimed a good portion of the North of the country, including the bulk of Northern Ontario, where the Liberals finished third in all but Anthony Rota’s riding of Nippising-Timiskaming where they placed second to a new Conservative MP.

As of press time, the Conservatives had won in Nippising-Timiskaming, held on to the riding of Kenora Rainy River handily and defeated the NDP’s Tony Martin in Sault Ste. Marie.

The early pundits lost no time in pounding nails into the separatist coffin, predicting the demise of the Bloc Quebecois after 20 years of that party’s domination of Quebec’s political landscape-and the inevitable questions of Michael Ignatieff’s future had begun even before the vote tallies had begun to come in.

The jubilation in the Conservative ranks stretched across the nation, however, as the results clearly indicated that the Tories are represented in every region of the country, making them the only truly national party remaining in the house-including Newfoundland, where the Tories’ gain was in Labrador. The NDP can also claim to be close to having a national presence while the Liberals have been reduced to a handful of largely urban enclaves.

Mr. Harper’s victory will place him amongst the longest serving of Canadian prime ministers and the main question facing him now is what will his legacy be, now that he is unfettered by the constraints of a minority government. For those on the right, the future looks bright and expectations will be high. 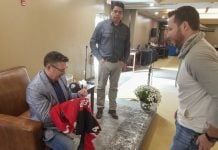 Charter of Values is political opportunism at its worst