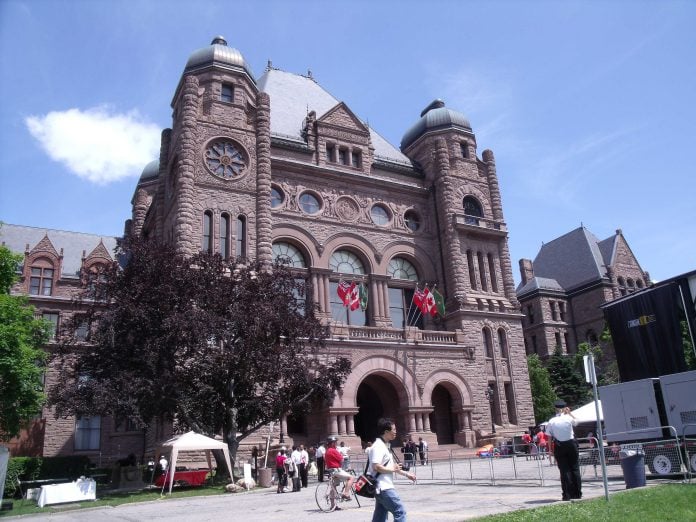 TORONTO (Nov.9, 2017)  – Today at noon, Indigenous youth and allies gathered to rally at Queen’s Park in support of a transition towards 100% renewable energy in Ontario and phasing out of nuclear power in the province. This is an unprecedented showing of Indigenous youth and leadership on the opposition of nuclear power and waste in Ontario, and will bring in a diverse coalition of allies calling for justice for Indigenous peoples and a renewable Ontario.

“It is insanity to expose people to these radioactive materials, whether it be improper storage near waterbodies or transportation through populated areas,” says Madahbee. “The solution is to stop producing the waste.”

The event is being hosted by Youth of Anishinabek and Iroquois Caucus First Nations, and Bawating Water Protectors.

The group is protesting the proposed burial and abandonment of nuclear waste on Indigenous territories and along major bodies of water including the Ottawa River (Chalk River) and Lake Ontario (Port Hope) and Lake Huron (Kincardine), risking contamination of the water, soil, and air forever.

Quinn Meawasige, a lead organizer for the event, says, “We don’t want your radioactive waste abandoned on our lands and poisoning our waters. We want a non-nuclear future, powered 100% with renewable technologies – wind, water, and solar.”

The rally comes in the lead up to key provincial energy decisions. The Pickering nuclear station’s license expires in 2018. And the province is committed to rebuilding ten geriatric reactors at Darlington and Bruce nuclear stations, locking us into a nuclear future for many decades – with still no adequate solution to the waste problem other than to bury it on Indigenous lands and territories.

Candace Neveau, member of the Bawating Water Protectors, says, “We are here to tell political leaders that water is life, nuclear power is incompatible with Mother Earth, and renewables are do-able today.”

Organizers of the event are calling on Premiere Wynne to close Pickering in 2018, and replace all nuclear stations in ON with 100% renewable energy, including wind, solar and water power from Quebec. With the 2018 provincial election fast approaching, Indigenous youth and allies hope the event will draw attention to these critical issues.

The event will feature speakers, music, and art.

The UOI is a political advocate for 40 member communities across Ontario, representing approximately 65,000 people. The Union of Ontario Indians is the oldest political organization in Ontario and can trace its roots back to the Confederacy of Three Fires, which existed long before European contact. The Anishinabek Nation established the Union of Ontario Indians as its secretariat in 1949.