According to a report from the Press Republican on Monday, Mr. Fox and Danine Swamp of Nedrow, New York, were travelling along Devil’s Den Road in Altona, New York, on Sunday night when witnesses say they saw their vehicle entered the water near a washed-out bridge.

The newspaper reports that police and rescue workers searched the area, eventually finding the car and the bodies of Mr. Fox and Ms. Swamp in the heavily flooded woods.

Mr. Fox, son of Lee Ann and Clint Fox of Wikwemikong, was well known to Islanders for his hockey prowess, as a forward for the Manitoulin Mustangs, Manitoulin Islanders and the Wiky Hillbillies sportsmen team.

Altona Town Supervisor Larry Ross told the Press Republican that rushing water had stripped the pavement and underlying soil from the bridge, “creating a drop of between 12 and 15 feet to the box culvert beneath.”

Former Islanders coach Barry Parsons said he was deeply saddened by the news and noted that he had the opportunity to meet Mr. Fox, adding “he saw a lot of determination and strong will with that boy.” 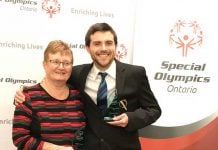