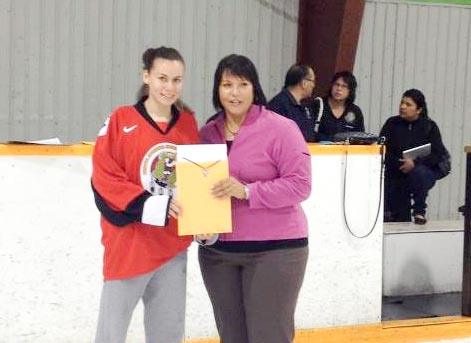 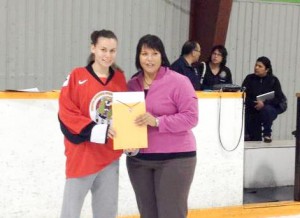 SASKATOON—Three Manitoulin teens are back on the Island after helping lead Team Ontario to a bronze finish at the National Aboriginal Hockey Championship, held in Saskatoon May 6-12.

Amber Debassige, from M’Chigeeng, joined Amber Lewis and her cousin Natasha Lewis, from Wikwemikong, on the provincial team.

Girls went to Sudbury in March to try out for the provincial team, some from as far away as Timmins and Moose Factory, Amber Lewis told The Expositor. The 15-year-old said she had tried out for the team the year prior, but was told she was too young. Since then, the tournament has started accepting people as young as 13 and as old as 20.

Amber spent this hockey season skating for the Manitoulin Secondary School Mustangs and the Lady Wolves, but in the past has played for the Panthers too.

The Ontario girls finished with a bronze medal, though it wasn’t an easy game, Amber said.

“It got tougher and tougher the longer the tournament went on,” she noted. “We played Alberta for the bronze.”

By the end of the first period, things were looking good for the Alberta team, which was up 2-0. However, the Ontario team rallied and tied up the game, with Amber scoring the third goal to pull ahead. The game ended in Ontario’s favour, 4-3.

“It was a lot of fun,” Amber said. “My cousin (Natasha) went last year so she told me what to expect.”

Amber also managed to place well in the individual skills competition, earning the second-place title for fastest skater in Ontario.

“I’m definitely going to try to get on the team again next year,” Amber said. She had a piece of advice for people taking part in sports.