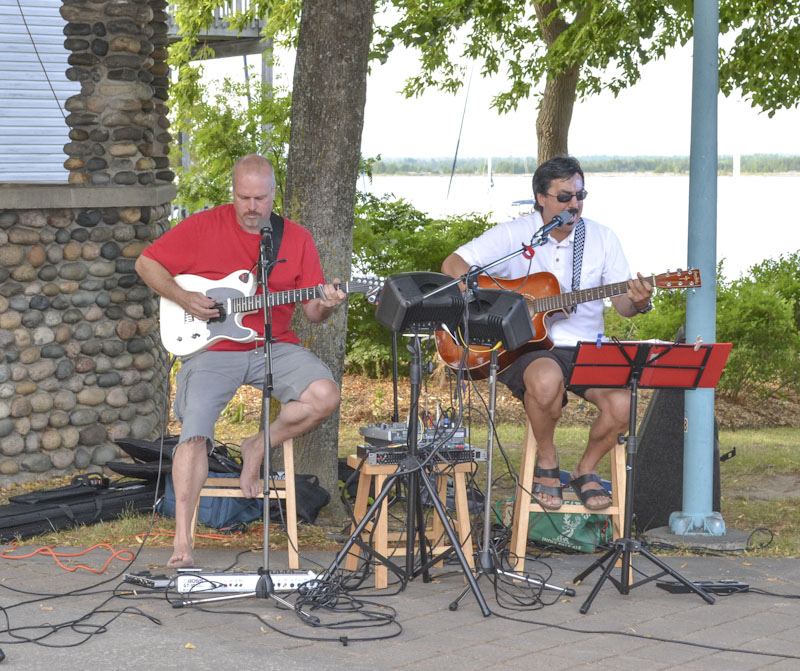 MINDEMOYA— Manitoulin Secondary School (MSS) teacher and local musician/songwriter Peter Nelson is perhaps not so well-known for his community contributions (including several years as a key backup musician on the annual Lions Telethon in Sudbury), but while travelling his own road of spiritual discovery he found himself embarking on a collaborative effort with singer Carl Steadmond of Ajax to create a children’s album of empowering tunes to which adults would also find themselves humming along.

“It all really began to come together when I met Carl (Steadmond), a guy with a really fascinating story, at a retreat in southern Ontario,” he said. Mr. Nelson has been on a journey of spiritual and personal discovery for many years and he and the Ajax singer connected almost immediately.

“Peter is a great musician,” said Mr. Steadman. “I don’t play an instrument, but I do sing. Peter likes to be more in the background, but I am the kind of guy who gets out in front.”

Mr. Steadman teaches at a Montessori school, so there was also that connection between the two composers, and he has earned a fifth dan black belt in the martial arts—an accomplishment made all the more incredible when you learn that he spent his childhood years between eight and 11 years confined to a wheelchair. A native of Liverpool, England, Mr. Steadmond was 14-years-old when he began to study the martial arts.

“In 2005 I had a shift in consciousness in life,” he said. At that point Mr. Steadmond looked around him and discovered that there were many children who grow up in life with low self-esteem.

When the singer connected with Mr. Nelson, who is a veteran music composer, the concept of creating a children’s album of song of empowerment began to germinate.

“I am really excited about it,” Mr. Steadmond said. “The intention is to get it out there.” Monetary gain is far a secondary consideration to this songwriting team.

“This is a guy who really doesn’t care that much about material things,” said Mr. Nelson.

The album consists of 10 songs, nine written by Mr. Nelson and one by Mr. Steadmond, and the team has collaborated over long distance for several months to bring the CD to fruition—and the work isn’t over yet.

“I imagine that in about two months it will be done,” said Mr. Nelson, who has committed about two years to the project, but he said every minute was worth it. “I want these ideas to travel.”

The lyrics are empowering, but tunes are designed to be catchy as well. “These are children’s songs that adults can like,” said Mr. Nelson. “They are listenable, Jason Moraz-type songs.”

That is the same sentiment expressed by Mr. Steadmond, who said that music has a tremendous power to inspire and to uplift the human spirit and that he hopes to build children’s character up through the use of that power.

The CDs and the songs will play a part in the workshops and talks that Mr. Steadmond delivers while on his personal mission to improve the outlook and mental health of children through music.

Mr. Nelson has spent the last few decades building up a significant home-based recording studio and he said that he has been itching for a chance to put his skills and equipment to work on a project he could be passionate about. He even picked up a ukulele and learned how to play it for some of the songs.

If the rest of the album lives up to this lyrical taste, there might well be a new Sharon, Lois and Bram on the road.