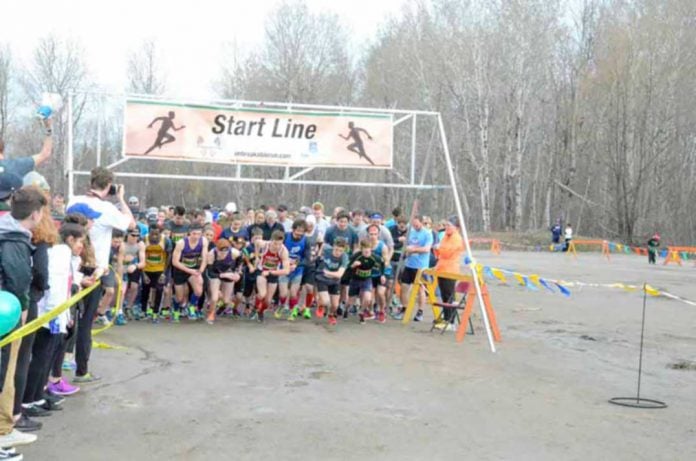 SUDBURY—Nearly 500 runners braved a chilly Sunday morning to lace up their shoes and run the five kilometre Rotary Park course of the first Unbreakable Spring Open in support of mental health awareness. At least two Island runners, Romme Hamid and Akasha Piche of Little Current, travelled to the Nickel City to take part in the run.

Both Island runners came in with respectable times, Mr. Hamid crossing the finish line in seventh with a time of 18:58 and Ms. Piche passing the marker at 71 with a time of 25:58. Winner of the 5K run was Laurentian University Voyageur indoor track team member Caleb Beland, who clocked in at 17:12.

“Romme was incredible,” enthused Ms. Piche. “One of the runners from the Laurentian team couldn’t believe he didn’t have a running coach.”

“I like to run,” admitted Mr. Hamid who is currently enrolled in Cambrian College’s satellite campus in Little Current, topping up his courses for college or university this fall.

But there was no podium recognition in the run, because as co-organizers, high school students Josh Tillson and Lauren-Ashleigh Beaudry noted, it was all about raising awareness and having fun.

The two students hail from different high schools with a long history of intense competition, but the organizers put rivalry aside to pull together in aid of a good cause. The duo hopes to raise enough money through the event to bring the suicide prevention program Cameron Helps to area schools.

The goal of Cameron Helps is “to reduce the stigma of youth mental illness, build awareness of the issues and to promote the positive aspects of physical health on mental health.” The program does this through speaking engagements, workshops, special events and media and by working with students, parents, social workers, school boards, hospitals, universities and a host of other health and community partners.

Cameron Helps was born out of a terrible and all-too-familiar tragedy. In 2005, 19-year-old Cameron Harris took his own live, unable to deal with the pain and despair of depression, despite being surrounded by those who loved him.

Personal tragedy and depression was also the motivation for the creation of the Unbreakable Open. Josh’s stepfather also took his own life, sending the 16-year-old into his own struggle with depression. It was through running that Josh found a way to cope.

Suicide is the second leading cause of death among young people and depression ranks foremost among catalysts for youth taking the decision to cut their lives short.

“We are overwhelmed,” said Lauren-Ashely of the response to this first run. “We have almost 500 participants.” For Josh, there was almost as much satisfaction in noting there were nearly 200 youth running. “It’s awesome,” he said. “Youth are what this day is all about.”

Unfortunately, there is still stigma surrounding the outlets we do have offered in our community,” notes the Unbreakable website. “That is why we’ve started the Unbreakable Spring Open. We have been affected first hand by suicide and depression, and we understand what it’s like to feel alone. Our goal is to ensure youth don’t feel that way. Our goal is to bring the Sudbury community together to raise awareness about mental health and work towards ending the stigma.”

Major sponsors of the event include RBC, Rewind 103.9 FM and Navigator Marketing Agency.