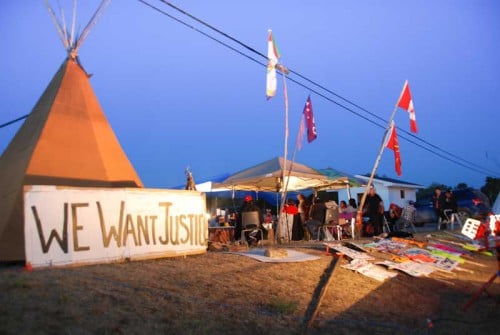 The community divisions at Sheguiandah First Nation, characterized publicly by a protest vigil on Highway 6 in the community’s centre, have been going on long enough that it’s fairly safe to assume that reflections and observations on this unfortunate issue penned on Monday will still be valid on Wednesday’s publishing day, coincidentally the one-month anniversary of the around-the-clock protest.

The elected council is evenly divided: two councilors are on the picket line and say that’s where they’ll remain until one of the other two elected officials, the chief (who is supported by the other elected councilor), resigns his position.

Both sides of the divide claim support within the community, so that represents a further, more serious, division within a small population.

Claims and counterclaims have been reported in this newspaper both by way of news stories and letters to the editor during this protracted period of bad feelings and so far, no faction seems to be getting what it wants and with half of the elected council protesting, clearly the ordinary work of the chief and council is in limbo.

There are issues, certainly.

The chief says he will meet with the community in a public forum, but only with Sheguiandah band members and not with other community members whose band membership is with other First Nation communities.

This remains one sticking point.

Another point of disagreement that is dividing the community is with the tack taken by the current administration with respect to housing and its hard line on rental arrears.

Both Indian and Northern Affairs Canada (INAC) and the Union of Ontario Indians (UOI) have been asked to intervene. A meeting involving INAC is scheduled for next month.

What is clear is that mediation of one form or another is required to begin a process that will help to overcome profound differences in the approach to the main points at issue.

Perhaps another approach would be to go outside the community, but not too far outside, and with the mutual agreement of all parties assemble a council of wise advisors who could themselves hold meetings and discuss their outcomes and possible resolutions with the council’s two factions, perhaps initially separately and then bring them together for mediated talks.

A month-long hiatus in the business of the community is sad enough but the more this is prolonged, the longer will be the process required for the community to reunite.