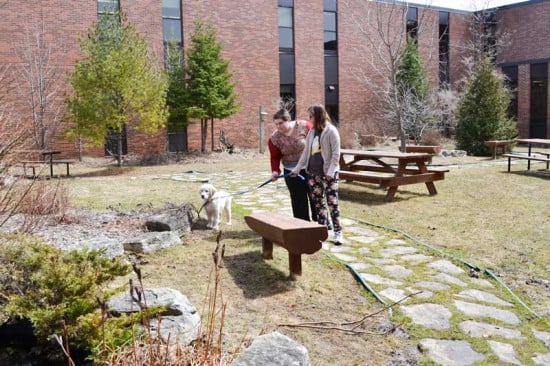 Pippin the Therapy Dog a welcome presence in the halls

M’CHIGEENG—Manitoulin Secondary School (MSS) has recently welcomed a new member, Pippin, a golden retriever puppy, as part of a therapy program for students.

“It has been wonderful,” MSS principal Laurie Zahnow told The Expositor. “The whole school has taken ownership of Pippin. Taking him for walks, playing with him in the courtyard and teaching him tricks.”

Ms. Zahnow explained that she had previously worked in a school that had a therapy dog, so when MSS faculty members Sherry Toner and Sandi Hurcomb approached her about the idea, she was familiar with the concept and the benefits.

“Having a dog in the school creates a sense of calm,” continued Ms. Zahnow. “They have a very soothing effect and can really help relieve stress through interaction. They also teach students respect for animals, how to care for someone else and they teach responsibility.”

She said that students will have the chance to witness the life-cycle of a dog as well, as Pippin’s mother (owned by Ms. Hurcomb) came into the school and interacted with the students when the mother dog was pregnant, and Pippin will continue to be a presence in the school.

“The students will get to see Pippin grow and develop,” added Ms. Zahnow. “It is a great program and it has been a very positive experience so far.”

“The students will get to see Pippin grow and develop,” added Ms. Zahnow. “It is a great program and it has been a very positive experience so far.”

Ms. Hurcomb told The Expositor that the idea of introducing a puppy into the school first came about after a negative incident occurred at the school a few years ago.

“A couple of years ago, we had an incident with a student kicking a puppy in front of the school,” explained Ms. Hurcomb. “Around the school there are many dogs that are not on leashes and I thought that a program with a dog would be something beneficial to help teach students respect for animals, as well help alleviate fears that some might have of dogs. I had also heard of all the proven benefits that a dog can bring to a school such as helping with stress.”

Earlier this year Ms. Hurcomb’s dog Levi became pregnant and Ms. Toner decided to adopt one of the puppies. The pair then approached Ms. Zahnow with the idea.

Now a few weeks into the program, Pippin comes to school daily with Ms. Toner and the students are able to take him for walks, play with him in the courtyard, take him to class with them and teach him tricks on their breaks.

Ms. Hurcomb and Ms. Toner were confident in the idea and benefits of introducing a dog into the school, but explained that they had no idea just how much Pippin would influence the students.

“Just yesterday I had a student who was struggling to finish a test,” Ms. Toner shared. “He had given up and put his head down on the desk. I quietly went over and put Pippin on the floor next to him. He starting petting him and then picked up his pen and wrote for a while, then went back to petting and eventually finished the test. I think having the dog there helped divert his attention away from the stress of the test and calmed him down. It was really something to watch.”

“Another student has issues walking down the hallway when other students are around,” shared Ms. Hurcomb. “We suggested that she take Pippin for a walk through the halls and with Pippin by her side, it gave her the confidence to interact with other students. He’s helping students socialize as well—he acts as a conduit of potential friendships.”

“We just keep hearing from students, ‘he makes my day’ and ‘this is the best idea ever,’ everyone is just really loving the program,” added Ms. Toner.

The Expositor also spoke with some of the MSS students who have formed bonds with Pippin.

“I really like teaching him tricks like ‘roll over’,” said Kelsey Barss. “He’s my best buddy and it’s really fun to play with him or take him for walks,” added Natasha Sheppard.

“I really like teaching him tricks like ‘roll over’,” said Kelsey Barss. “He’s my best buddy and it’s really fun to play with him or take him for walks,” added Natasha Sheppard.

Ms. Toner said that once Pippin is one-year-old she plans to get him certified as a therapy dog (dogs must be at least one-year-old before they can earn this title).

“His home will be here (at the school), but it would be nice to be able to take him to hospitals and nursing homes too,” said Ms. Toner.

Not only was the program supported by Ms. Zahnow and the MSS student council, the Rainbow District School Board also stands behind Pippin and the benefits a therapy dog can bring to a school.

“We do not have a formal therapy dog program at the board level. It is a school-based decision in response to student needs,” said Norm Blaseg, director of education for the RDSB. “Schools may, from time to time, have therapy dogs come in to support students with special needs, to promote literacy or to teach empathy, providing there is an appropriate environment.”