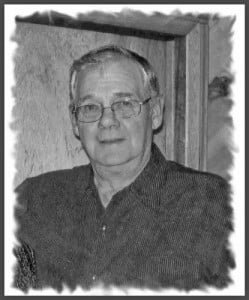 In 1969 Ted’s dream of owning a farm on Manitoulin Island became a reality. In the midst of running the farm, building a new house and raising a young family he found time to enjoy playing hockey, curling, and a Sunday morning round of golf. When his two sons were old enough to play hockey Ted took up coaching and was able to get a chance to coach both of the boys’ teams. He enjoyed farming until his semi-retirement in 2005, which allowed him to travel more extensively. Ted and Pat enjoyed visits to Alaska, The Canadian Rockies, Newfoundland and most recently Arizona, where Ted finally got to experience the natural beauty of the Grand Canyon. A resident of Big Lake, Ted died at the Manitoulin Health Centre, Mindemoya on Monday, June 11, 2012 at the age of 69. Born in Sudbury but raised on the Manitoulin, son of the late David and Sylvia (nee Bond) Dryden. Ted will be forever missed by his loving wife Pat, of 47 years, sons Rodney (Aruna) of Val Therese and Ryan (Sandi) of Calgary. Proud grandpa of Dylan and step-grandpa of Jett and Chaz. Sadly missed by his sister Marguerite Hayes (Jack). Predeceased by brothers Ronnie (Betty) and Glen. Fondly remembered by Pat’s family Donna VanHorn (Jim), Chuck Moody (Esther) and Joanne Lamoureux (Al). Predeceased by brother-in-law Dale VanHorn. Always remembered by his nieces and nephews. Visitation was 7:30 pm to 9 pm on Thursday, June 14, 2012. Funeral Service was at 11 am on Friday, June 15, 2012, all at Mindemoya United Church. Burial in Mindemoya. Arrangements entrusted with Island Funeral Home, Little Current.