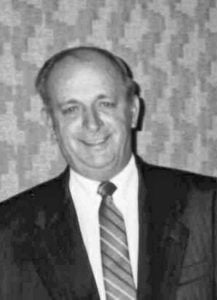 James Alfred (Jim/Bill) Presley died July 23, 2016 at North Bay Regional Health Centre at the age of 81. Jim was predeceased by his spouses Jeanine (Boivin) and Fran Smuck and his son Paul. He is survived by his sons James (Mercedes) of Edmonton, Will (Mona) of Powassan, Peter (Sherry) of Edmonton. He is also survived by numerous grandchildren and great-grandchildren. Jim was from a family of three girls and four boys. His sister Joan McConnery was a great support and caregiver up to his death. He was a proud Legion member and had many wonderful friends in Branch 23 and especially Mackay homes. Jim was a dedicated route salesman for most of his life, principally in the Manitoulin/North Shore area. He and Jeanine operated Presley’s Corner Store on Melvin Avenue in Sudbury in the 70s. Jim enjoyed sports and helping others in any way he could. Jim was treated very well by the staff at the Hospital, and donations to the NBRHC Foundation in his name are encouraged. A Celebration Of His Life will be held at the Royal Canadian Legion Branch #23, 150 First Avenue West, North Bay, ON, on August 20, 2016 from 2 pm to 4 pm and all are welcome to come and share their memories of a great guy. Online condolences can be made at www.mcguintyfuneralhome.com.