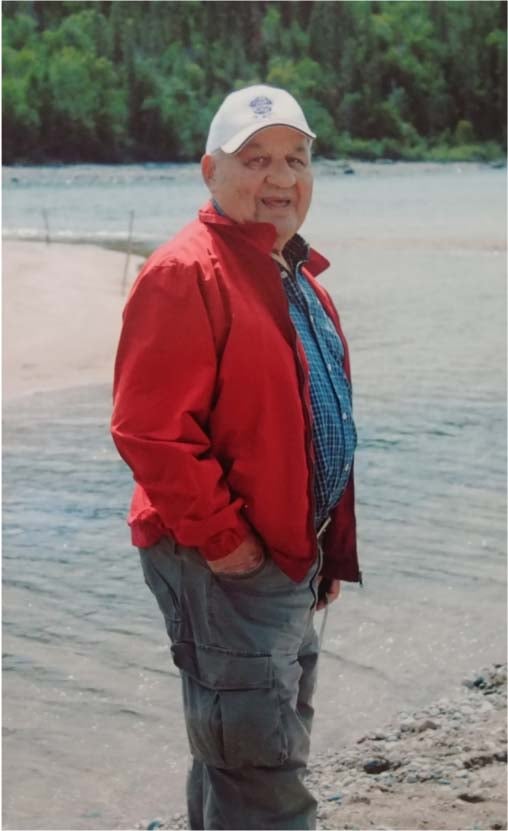 JOHN MAXIME
MISHIBINIJIMA SIMON
aka ‘Max’
February 6, 1932 – August 5, 2022
John Maxime Mishibinijima Simon, better known as ‘Max’, began his Spirit Journey on August 5, 2022, at the age of 90 surrounded by his loving family. Max will be missed immensely by his devoted wife, Margaret, of 70 years and their 10 children: Dan, John, Gordon, Theresa, Rudy (predeceased), Barry (predeceased), Gina, Gary ‘Sandy’, Donna and Darlene. In addition, he will be missed by many extended family and friends. Cherished grandfather ‘Mishomis’ of 18 grandchildren and 21 great-grandchildren. He was the oldest son of Sophie Mishibinijima Simon. Max was born in Wiikwemkoong, Manitoulin Island on February 6, 1932. For 13 years he attended Garnier-Spanish Residential School located in Spanish, Ontario, where he found solace in hockey. Max was six-years-old when placed at Garnier and spent the little free time he had on the outdoor rink. Despite being given skates too large in size, he filled them with rags to make them work. As one of the last surviving students, Max made a lasting statement about the Indian Residential Schools, “May this never happen again to any other child.” After an exchange of vows, Max moved his wife, Margaret and first born to Wawa, Ontario where he found work and rooted his family. His children describe their dad as a leader, warrior and committed father, who did his best to instill good values and Anishnabe pride. Max loved the outdoors, woodwork, fishing, hunting, painting, dancing, and his many dogs, two last memorable ones–Sam and Cap. For 70 years Max resided in Wawa, Ontario, finding work at the Algoma Ore Division (A.O.D) as a miner, and recreation in various baseball and hockey leagues. His skills on the ice and wrist shot were legendary, who knows what might have been if the NHL scouts had ever travelled to Wawa in the pre-highway days. Max still got on the ice regularly before reluctantly hanging up the skates in his 84th year. There are many folks who prided themselves for the opportunity to lace up and skate with him, better yet receive one of his precision passes. “He may have played centre, but never did he expect to be the centre of attention.” He was well-known throughout the Northshore and Manitoulin. A piece of his heart remained with the Island, a place he would often return to with his wife and children, to visit family and relatives. Max’s last trip to his home community, was just days before his passing–his hope was to attend the Wiikwemkoong Pow Wow, visit friends and family. As hard as he tried, physically he could not make it, the Creator had other plans and returned him to Wawa. Max was a kind and gentle soul who will remain in the hearts of all who knew him. He was admired by many for his kind and humble nature. Of his decades in Wawa he said, “We love the town, and you won’t meet any better people anywhere than you will in Wawa.” His smile, kind words and twinkling eyes made everyone who met him, feel special. In lieu of flowers, the family requests that donations in Max’s memory be made to the Wawa Lady Dunn Hospital. The Simon family would like to acknowledge the care and love provided by all staff and doctors of Wawa Lady Dunn General Hospital and Sault Area Hospital Renal Clinic. Arrangements made by O’Sullivan Funeral Home. Mass 1 pm, August 20, 2022 at St. Monica’s Catholic Church, followed by a Celebration of Max’s Life at 3 pm at the Wawa Local Legion branch.
BAAMAAPII AGA WAABMIGO