1933 – 2011
John died suddenly in his beloved yard on McLean’s Mountain Road on Wednesday, June 29, 2011. Treasured husband of 54 years to wife, Patricia Ann (Ciann) (nee Lawson), and loving father of daughters Kathleen (Jerzy), Shauna and Maureen (Becky). Survived by sister Daphne Stapleton (Monty), brother-in-law Robert Lawson (Jan, deceased) and several nieces and nephews. Predeceased by brothers James Strickland (Midge), Tony Strickland (Joanne), and nephew Tony Stapleton. Loving companion to numerous pets, notably his cherished dog, Jorgy. John grew up in Toronto, spending summers in Lake of Bays and Algonquin Park where he developed a love of nature, canoeing, and places that were remote and untouched. As a young man he attended mining school in Haileybury, prospected in remote Ontario and Newfoundland, and studied geology and education at UNB. During his early married life and with a young family, he worked as a geologist in underground mines at Pickle Crow and Elliot Lake and taught high school in Lennoxville, Port-Cartier, Tanzania, and finally at Manitoulin Secondary School teaching geology where he was fondly known to his students as “Joe Rock”. When he retired, he did the craft show circuits with his “fossil folk” figurines and conducted canoeing expeditions with his company Geo-Expeditions. Canoeing was a lifelong passion. He canoed with his brothers and sister as a youth, with his daughters, family members and friends as an adult, and for 27 years made a yearly canoe trip with canoe buddy Pat McGill right up to the age of 77. He spent 42 years on Manitoulin, loving the fossil-rich geology, the proximity to the Canadian Shield and the relaxed pace of life. His final years here were spent with his wife Ciann, enjoying cottage life on Lake Kagawong, attending community events, tending to his dog, and working in his yard. Appreciator of nature, poetic paddler, enthusiastic storyteller, loud singer of songs, reliable helper, animal lover, meticulous planner, duct tape wielder, puttering genius, tending to the eccentric…John lived his life the way he wanted to live it. We will miss him dearly. Visitation will be on Thursday, July 7, 2011 at the United Church Hall, Little Current from 2 pm to 4 pm and 7 pm to 9 pm. On Saturday, September 10, 2011 at 1 pm, we will gather at the Park Centre in Kagawong to celebrate John’s life. Donations in John’s memory may be made to Pet Save Manitoulin, Manitoulin Secondary School Student Aid Fund or to a charity of your choice. Arrangements entrusted to Island Funeral Home, Little Current. 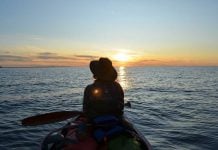 ‘The Attempt’ : Duo paddles around Island in under two weeks