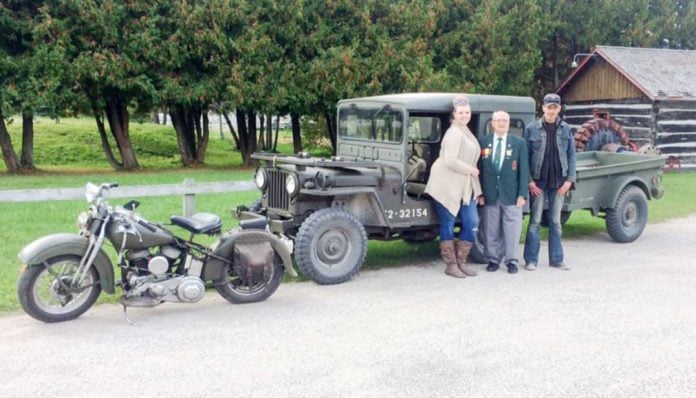 KAGAWONG—The Old Mill Heritage Centre is again full to the brim with what is widely regarded as the biggest North exhibit of military exhibits from WWI, WWII and the Korean War, for its annual exhibit running from November 1 to 11. Included in the vast collection is a Korean War Jeep and trailer and a World War II motorcycle.

“I’m absolutely delighted to have a local resident like Christian Shoebridge who has such a great love for military history-and has such a wonderful collection that he wants to display here,” said Rick Nelson, curator of the museum.

“We are gearing up for our annual military exhibit which we have hosted since 2008,” said Mr. Nelson. “Mr. Shoebridge is augmenting the displays we already have with pretty much enough artifacts to fill our building from his personal collection. He has brought a trailer full of Canadian military artifacts, uniforms,  weapons, flags, vehicles and German-Nazi memorabilia.”

“One of displays we have is of a tribute to our own local military veterans and current members of the Canadian Forces,” said Mr. Nelson. “We have multi-media equipment, displaying documentaries on aspects of wars going back 100 years. One room is devoted to WWI, another to WWII and another to the Korean War, as well as the German room, featuring history of Nazi Germany.”

A highlight of the exhibit is the Wall of Heroes, bearing the names of current members of the Canadian Armed Forces. This includes a salute to them and a wall with their pictures and what their service record is.

“And back by popular demand is Christian’s WWII Harley Davidson motorcycle used by the Canadian Army,” stated Mr. Nelson.

“I guess military history was one of those things that I’ve always had an interest in since I was young,” Mr. Shoebridge told the Recorder. “Even in school I was always interested in the history behind all the wars and conflicts, where equipment and vehicles were used, who used them and where they came from. And especially things that I didn’t know anything about that came to light after I did more research made it more interesting.”

Mr. Shoebridge noted that in talking to area Korean War veteran Red Butler after last year’s display, the latter suggested there wasn’t a huge display last year on the Korean War. “This year I decided to bring my Korean War Jeep used by the Canadian Army. This is A 1952 model with an amphibious trailer.”

“I had to find three pieces of jeeps to make this one,” noted Mr. Shoebridge. “I used all original parts. I had to photographed the original configuration, stenciling, and put it together from there. The Ford company made a very small number of them, there are now less than 500 on the planet, they are the rarest of Jeeps made.”

“This is an upgrade on the WWII version of the Jeep,” said Mr. Shoebridge.

Mr. Shoebridge noted his collection includes soldiers uniforms and field equipment on display, with many artifacts being one of a kind items that tell their own story. The display will include items soldiers brought back with them from WWII, medal sets from WWI, an English version of Adolf Hitler’s Mein Kampf, a collection of edged weapons from as early as the Civil War and much more.

“This all leads to our big November 11 Remembrance Day ceremony being held at the Park Centre at 11 am,” said Mr. Nelson. “The theme for this year’s ceremony is Leadership Over the Years. While we honour our veterans and current serving members, we felt we should  look back to all the military leaders and the decisions they made over the past 100 years and take a look at what lies ahead in 2017 and beyond.”

Mr. Nelson noted the military exhibit will be open from noon until 4 pm, and then from 6 to 8 pm every day through November 11.