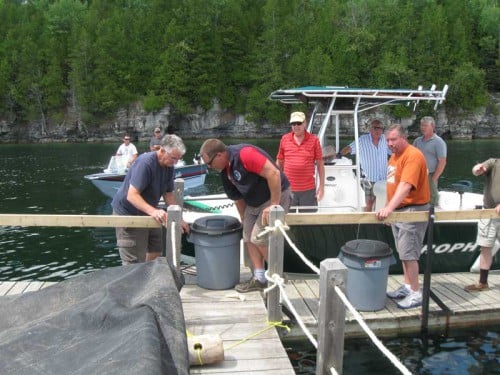 LONG BAY—The spirit of partnership and the development and success 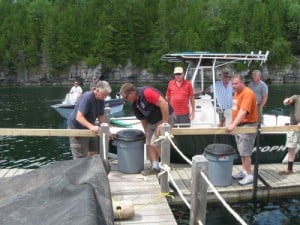 of the Lake Kagawong Walleye Fish Hatchery pilot project was in the air as representatives of the United Fish and Game Clubs of Manitoulin transferred between 3,800-3,900 healthy fish to cage-nets on Lake Kagawong on Tuesday, to raise to a size where they will then be released in the lake this fall.

“I think we can honestly say this has been a very successful beginning,” stated Jim Sloss, chair of the UFGCM. The walleye, which had been raised in troughs in the Kagawong hatchery, was transferred to the cage culture nets in a location near Long Bay Lodge on Tuesday.

“The fish have almost doubled in size over the last two weeks. This last batch was provided by the MNR (Ministry of Natural Resources) through Paul Methner and the Blue Jay Creek Fish Culture Station. Some of the fish are as big as eight inches already.”

“The fish are doing fantastic,” stated Mike Meeker, of Meeker’s Aquaculture, who has helped guide the fish and game clubs through the fish raising process.

“The next step is to see if we can get them to the advanced fingerlings stage before planting them in Kagawong Lake,” said Mr. Sloss.

Mr. Sloss explained, “according to research we have, the fish are over the stage that they would possibly predate on each other. These fish are going to be put into the nets in the lake, which provides for a larger area for them to grow. While other, similar projects have been done in ponds rather than lakes, and the nets are generally 4x4x8, our system has nets 10 feet square in size and 10 feet deep.”

“Lake Kagawong is ideal for stocking walleye, and we seem to be over the hump and have learned a lot through this process,” said Mr. Sloss. He pointed out Jeff Cunningham, owner of Long Bay Lodge, has been very supportive to allow the nets to be located near the resort he operates.

Wayne Selinger, biologist with the MNR Espanola district office, told the Recorder the fish being raised and stocked by the UFGCM will fit in very well with stocking the MNR has done, with over two million fry and pond fingerlings having been stocked over the past six years.

“We see this project as an opportunity to build on the program, and with the club taking and growing out the fish, it is good for Lake Kagawong,” he said. “The main thing is Lake Kagawong is a complex fishery, and when the community of one particular fish is larger, they have a better chance of survival. This project builds on our capacity, and enhances the local fishery. We are in full support of what the UFGCM is doing and are happy to partner with them and it is a pleasure to see this being such a positive.”

The UFGCM has installed a dock (along with the nets) with dawn to dusk lights, and four Canadian flags, which should help to provide more of a visual impact, and have posted a 3×6 foot sign explaining what the clubs and the project are about––that this is a pilot hatchery project in which walleye are being raised, with support having been provided by the LaCloche-Manitoulin Business Assistance Corporation, FedNor and Manitoulin Area Stewardship Council (MASC).

“The precedence for this project has been set in Toronto over the past two-three years,” said Mr. Meeker. “This has been a very successful project. We have moved through two very important parts of the process with raising pickerel, and we knew it would be tricky as pickerel are normally hard to raise.”

“Now we are in the third part of the pilot project and I know the fish we have now will do well in the nets,” said Mr. Meeker.

Mr. Meeker pointed out the fish will remain in the nets on Kagawong Lake until mid to late September. “We will have to play it by ear as to when the fish will actually be released in Kagawong Lake, but the fish are four-five inches and some even larger than that already and if we can get them up to about eight inches which I’m sure we will be able to, we will be able to release them in the fall. We want to get them as big as possible before they are released in the lake.”

Among with those on hand for the transfer of the fish on Tuesday was MCTV, Manitoulin Area Stewardship Council representatives and Algoma-Manitoulin MPP Michael Mantha. “We are inviting all these individuals and groups because we want people to know about the project. The future of fishing will depend on it, and we think this project is something that can happen across Manitoulin Island,” said Mr. Sloss.

“This is awesome,” stated Mr. Mantha. “It’s a positive sign for the Island for sure. We have to give credit to the fish and game club and Mike Meeker for all the work they have done. This type of project will help tourism on the Island and is definitely a success story. All levels of government should be embracing this type of project––this is the way to go.”

“You hear stories of some sport fishermen not returning to areas like the Island if the fishing isn’t good,” continued Mr. Mantha, “but where you see the opportunity for a grass roots group of volunteers like there is in this project, who are motivated to help the communities on the Island with this type of project, well, I have to tip my cap to everyone who has been involved. And I will do all that I can to make things easier with future projects in terms of getting rid of any red tape for approvals. This is a success story not only for Manitoulin Island, but all of Ontario.”

Mr. Methner told the Recorder, “I think this project will help support the stocking we have done in Lake Kagawong the last few years, which seems to be working because more people are catching walleye in these waters. With this partnership the club is producing fish we don’t have room for, in terms of raising them to advanced fingerling stage. The fish we provided have been fin clipped so when people catch them they will know they came from this project, and will help be the measure for the success of the project.”

“There is definitely a benefit for everyone with the partnership with the fish and game club,” said Mr. Methner. “And just look at the number of people around here today just viewing what’s going on. It just shows people really care about the lake and fishing and we definitely support what the club has done.”