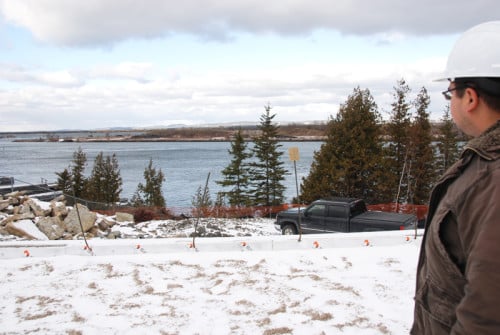 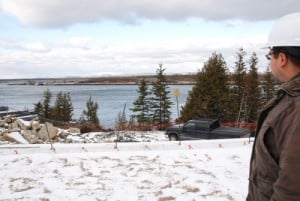 LITTLE CURRENT—Kevin Eshkawkogan stands on what will be one of the first-floor suites in the Manitoulin Hotel and Conference Centre, overlooking the North Channel. The view is a beautiful display of blue water, white and brown stone and the dark green of the conifer trees that dot the distant shore and line the nearer.

The 58-room complex will eventually include a swimming pool, 300-plus capacity conference hall and a restaurant that will feature First Nations food, according to Mr. Eshkawkogan.

The CEO of the Great Spirit Circle Trail, one of the major share-holders in the hotel project, is on-site watching the crews push through a recent snowfall to finish up the last touches on foundations, stairwells and elevator shafts.

The public areas of the hotel will be heated with geothermal energy and the drills are on site chewing through the rock, creating the shafts necessary to harness that energy.

The individual rooms will have their own heat controls, though, Mr. Eshkawkogan noted.

Once the drilling is done, the walls should start going up. Mr. Eshkawkogan said that, unless there are delays, the walls will be up by the New Year.

Once the walls are up and the roof on, work will proceed much more quickly, he noted.

“It doesn’t look like much has been done, but it’s all been underground preparation work,” Mr. Eshkawkogan told The Expositor. “There’s a lot of finishing work that goes on inside, but the walls need to be up first.”

“These are people who travel later in the season or in the winter,” Mr. Eshkawkogan mentioned.

Once complete, the centre will provide roughly 35 full-time positions, though some of those positions would be broken up into part-time jobs. The centre will also be tendering out for a company to occupy the restaurant and provide a dining experience that’s steps above “French fries and burgers,” Mr. Eshkawkogan said.

For the interior, Mr. Eshkawkogan said the hotel and conference centre would pay a subtle homage to the First Nations roots behind the project, to avoid being “campy.”

“There will be a lot of natural elements, like wood and stone,” Mr. Eshkawkogan explained. “A lot of places put a lot of emphasis on metals and glass and it won’t be like that.”

The lobby itself will be shaped in a circle, an important shape to the First Nations people. The pillars in the lobby will represent the seven grandfather teachings, the pillars of First Nations tradition.

So long as the building project remains on schedule, Mr. Eshkawkogan said the hotel should be open in the early summer, with the conference centre and restaurant following a short time later.