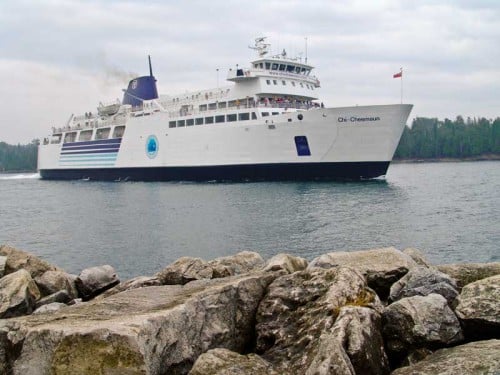 SOUTH BAYMOUTH—Last week, during the Manitoulin Tourism Association’s (MTA) annual general meeting, the membership was surprised to learn that the Chi-Cheemaun ferry has increasingly less keel draft in its South Baymouth port entrance.

Susan Schrempf, president of the Owen Sound Transportation Company (the Chi-Cheemaun’s operating company), was invited to the meeting as the guest speaker, giving an informed presentation on the Chi-Cheemaun and its current consultants’ study on increasing ridership.

“Right now there isn’t a lot of water getting into South Baymouth,” she told the audience. “This is the lowest water we’ve seen since the 1960s,” she added, noting that this was before the Big Canoe’s time.

“We have no keel clearance on extremely windy days,” Ms. Schrempf plainly stated, laying it out to the public, adding that deepening the channel will be a requirement sooner than later. Ms. Schrempf said that the issue called more for blasting rather than only dredging and she expressed concern about this happening in light of current regulations concerning construction in and around water bodies.

According to Tehkummah Reeve Gary Brown, currently there is roughly six to seven feet of clearance for the ferry at the entrance of the harbour over and above the Chi-Cheemaun’s ordinary requirements.

Ken Ferguson, chair of the MTA, told The Expositor that the MTA will be working with the Owen Sound Transportation Company to help resolve the low water issue at the entry of the port of South Baymouth.

“Low water levels in Lake Huron are everyone’s concern these days,” Mr. Ferguson stated, “and this is a really good example of how this situation may threaten our tourism industry here if water levels continue to drop to the extent that, some days, the Chi-Cheemaun might not be able to easily enter the port.”

“This is, of course, a worst-case scenario, but we want to do whatever we can to make sure nothing like this ever happens,” Mr. Ferguson continued, committing the MTA to working with the ferry’s operators as well as with federal and provincial political representatives to keep the channel into South Baymouth clear for the Chi-Cheemaun to navigate with comfort and safety.

The Expositor also spoke with both MPP Michael Mantha and MP Carol Hughes on the subject.

“I am more than willing to try and help out as best I can,” Mr. Mantha said, adding that he was hoping to meet with Chi-Cheemaun stakeholders soon. “I have a research team looking to see if any funding is available to help—this will be a priority.”

Both Mr. Mantha and Ms. Hughes were unsure as to where jurisdiction lies in regard to a project such as the blasting of the South Baymouth harbour, but both said they would be looking into it.

“I can certainly look to see where that (responsibility) lies, but I have to be asked first—unless there’s an ask, nothing gets done,” Ms. Hughes said.