MANITOULIN – Master Cadet (MC) Rhys Allison of 348 Royal Canadian Sea Cadet Corps (RCSCC) Manitoulin along with two southern Ontario cadets have been recognized (virtually) for the contributions they made in support of the family of a sea cadet who passed away in a drowning incident on Manitoulin Island. On July 22, 2019 Master Warrant Officer (MWO) Kyle Benedict of 59 Essex and Kent Royal Canadian Army Cadet Corps (RCACC) passed away as the result of a drowning accident in Meldrum Bay.

MWO Kyle Benedict’s funeral was planned for July 31, 2019 in Providence Bay, where his mother resides. Chief Warrant Officer (CWO) Marguerite Jones of 59 RCACC and Warrant Officer Second Class Rinoa June from 294 Royal Canadian Army Cadet Squadron (RCACS) were friends of MWO Benedict and had requested permission to attend the funeral. At the request of the family, both CWO Jones and WO2 June consented to be part of the service as flag bearers for their friend, SLt Sylvain Boucher, commanding officer for RCSCC 348 Manitoulin explained in a press release. A request went out to the cadet corps/squadrons in the Providence Bay area and MC Rhys Allison of 348 RCSCC Manitoulin volunteered to support a fellow cadet in their departure.

“On July 31, 2019, CWO Jones, WO2 June and MC Allison represented the Cadet program with distinction during their duties,” wrote Commanding Officer Boucher. “Their actions were recognized and greatly appreciated by not only MWO Benedict’s family, but by all of the Providence Bay community in attendance.

“I didn’t know (MWO Benedict) personally, but I was asked by one of our officers, Tina Davidson if I would represent the Sea Cadets at the service,” MC Allison told the Recorder this past Saturday. “Of course I said yes, that I would help in remembrance of a fallen cadet.”

MC Allison noted at the time of the ceremony he did not know CWO Jones and WO2 June, “but I did get to talk to them and get to know them a little after the service.”

MC Allison joined cadets just after turning 13. He has attended his general training course at HMCS Ontario where he was awarded the ‘Cock of the Walk’ for Quebec Division as well as the top cadet in his general training serial. At his home corps, he is part of the guard and a member of the marksmanship team. In his personal activities, he helps his father with the family lumber business, sings in the church choir and tries to be active in the community where COVID will currently allow.

Lieutenant Colonel Leonard and CWO Godbout virtually presented each of the cadets with their CO’s Commendation Certificate, which MC Allison and the two others received, and opened, in a virtual ceremony which took place last week.

“Thank you to the cadets for their dedication to their fellow cadets and families and thank you to everyone for taking the time today to join us in recognizing the contributions that our cadets make to the greater community,” SLt Boucher said.

The certificate presented to MC Rhys Allison reads, “in recognition of your strength, dedication and readiness in volunteering to represent 348 RCSCC from Little Current, Ontario, as a member of the flag party for the funeral service of a fellow cadet who had passed away suddenly. Your actions demonstrated a strong sense of fellowship during a period of profound grief, and the manner in which you fulfilled your duties brought much credit to Central Region and the Canadian Cadet Organizations.”

Kyle Benedict, an 18-year-old man from Chatham, had been a MWO with Chatham’s 59 Legion Highlander Royal Canadian Army Cadets. 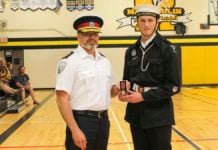