MANITOULIN—Manitoulin East Flying Club is taking flight and will be securing its first airplane by February 25. With seven confirmed co-owners lined up and folks expressing interest in the rest of the 10 spaces the wind is definitely under the club’s wings.

Club interim chair Wayne MacDougall confirmed that incorporation papers are in the process of being filed as a not-for-profit, with interim vice-chair and secretary Bruce McCulligh and interim treasurer Betty Anne MacDougall listed.

“We are all interim until we get voted in,” laughed Mr. MacDougall.

Secretary McCulligh thanked all those who have confirmed their intent to become part owner and a member of the club, but cautioned that those still interested should signal their intent with concrete action if they want in on the ground floor. “I understand this may be a difficult decision for you and it certainly needs to be something you have a desire to do and can make the financial and time commitment to learn to fly,” he said. “The owner of the aircraft we are wanting to purchase has made a commitment on another aircraft for himself and has given us a deadline of Wednesday (February 23) of this week to firm up our offer. We have only three spots remaining, and I would appreciate a yes or no from you as to your preparedness to commit as a co-owner and future pilot.”

The club now has a vision and mission statement. The vision being, “To encourage and promote an interest in aviation, to advance knowledge in aeronautical subjects, and to bring more people the social benefits and pleasures of recreational flying in a club environment,” and the mission “to provide members access to an affordable and versatile aircraft that will allow them to further their flying skills in a safe and fun manner.”

The plane the club is buying is a PA-28 Piper Cherokee 140 with a 160hp engine upgrade. (The 140 designation in the plane’s name indicates the engine size.) The designation Piper PA-28 Cherokee refers to a family of two-seat or four-seat light aircraft built by Piper Aircraft and designed for flight training, air taxi and personal use. Just about perfect for the club’s needs. The PA-28 family of aircraft are comprised of all-metal, are unpressurized and single engine-powered by piston. The airplane features low-mounted wings and tricycle landing gear and have a single door on the right side which is entered by stepping on the wing.

Mr. MacDougall noted that those establishing the club are motivated by a desire to share their own passion for flying with others, including youth.

“I got my start and learned to fly in the air cadets,” said Mr. MacDougall, who originally hails from Chatham. He recalled hanging out at the local airport as a youth and even taking on a part-time job at the airport there in order to make money for his flying lessons.

The highlight of his flying career was getting a ride on an F-18 fighter.

While the bar of approximately $3,700 purchase portion and $855 a year in ongoing fees might be out of reach of some folks interested in supporting the club, an option to be just a member will be set closer to the membership of the Gore Bay Airport Flying Club ($45).

Plans are in the works for a flying instructor and ground school options as well.

Those interested in being a part owner, or to just join as a member, are asked to respond to manitoulin.east.flying.club@gmail.com. 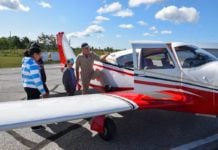