MANITOULIN—The Manitoulin Special Olympics team took part in several events over the past week, and at the same time big announcements have been made concerning major competitions local athletes have been chosen to take part in.

“We received an email from Special Olympics Canada that two of our athletes, Kelsey Mellan and Matthew Bedard, have been chosen for the (Team Canada) snowshoeing team to take part in the world championships being held in Austria in 2017,” stated Janet Anning, MSO coordinator and coach. “This is great news and they both deserve to be going.”

As well, Ms. Anning noted that MSO athletes Yuri Clayton and Roger Howard will be competing in the provincial spring games in five pin bowling in Guelph.

This past weekend in Sudbury, MSO bowlers took part in the North East region competition held at Plaza Lanes in Sudbury, with great results. “We had a total of 21 bowlers take part, with three of our athletes getting first place, and we had two seconds and five third place finishes.”

“All our bowlers came away with ribbons and everyone bowled well,” said Ms. Anning. “And everyone enjoyed the dinner and dancing afterwards and socializing with other athletes and coaches.”

On Wednesday of last week, MSO athletes and coaches took part in the annual OPP Law Enforcement Torch Run held in Mindemoya. “OPP officer Rene Lalonde was in charge of the event and there were about 40 of us altogether taking part, including about law enforcement people OPP officers, UCCM Anishinaabe Police Officers, MSO athletes and coaches,” said MSO Coach Roslyn Taylor.

“The police hold other fundraising events throughout the year to raise funds for Special Olympics teams going to provincials. We owe them a big thanks for all their support,” said Ms. Taylor.

Participants started out at the parking lot at the Mindemoya Community Centre and travelled through the downtown area and past Central Manitoulin Public School, who also took part in the Torch Run and cheered on the MSO athletes and police officers.

“The white team had a total of 15 players, with the blue team having 14 players,” said Ms. Taylor. She explained, “there were 16 teams in total take part, (white team had three teams in its division, with the blue having four teams in their division. There were teams from London (three teams), Peterborough (two teams), Simcoe (two teams), Hamilton, Chatham, Guelph, LaSalle, St. Thomas and Burlington all had one team; Sudbury/Manitoulin had two teams.”

“The blue team won two games and tied one in single round robin play to finish in first place,” said Ms. Taylor. 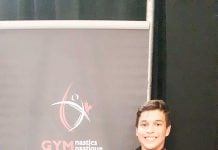 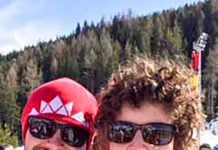 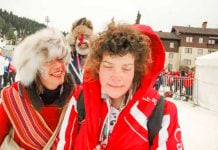 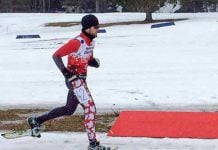 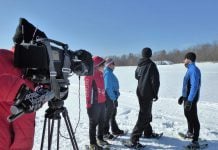