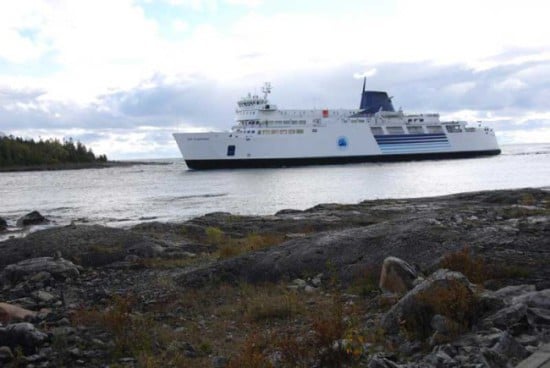 EDITOR’S NOTE: This letter was sent to Minister of Transport Denis Lebel last week by Manitoulin Tourism Association President Ken Ferguson and is reprinted here at his request.

Manitoulin Island is just that: an island. We are located at the northern end of Lake Huron’s Georgian Bay and it is our proud boast that ours is the largest island in fresh water in the world.

This having been said, it’s important to point out that, as an island, access is sometimes tenuous for the nearly 15,000 people, including six First Nations communities, who choose to live here.

One point of access is via an historic (100 years old this year) swing bridge located at Little Current at the most narrow point of the North Channel.

The other point of access for the Island population and its all-important tourist visitors during the spring, summer and fall seasons is via the Chi-Cheemaun ferry that carries people, their vehicles and also commercial transport traffic between Tobermory, at the tip of the Bruce Peninsula in southern Ontario to South Baymouth on Manitoulin Island in Northern Ontario.

Earlier this week we learned via a communiqué from the Owen Sound Transportation Company, the Ontario-owned company that operates the Chi-Cheemaun ferry, that due to the dropping water level in Lake Huron this spring, the Chi-Cheemaun’s docking system is expected to be inadequate to provide safe docking in both South Baymouth and Tobermory for the Chi-Cheemaun and her passengers.

In other words, the Chi-Cheemaun is unlikely to be able to sail until the water levels rise to appropriate levels and, even then, the sailings could be day-by-day.

We knew that the docks in South Baymouth and Tobermory, purpose-built to accommodate the Chi-Cheemaun ferry when she was built and launched in 1974, remain under the ownership and responsibility of your ministry, Transport Canada, and we were shocked to learn that the Government of Canada, through Transport Canada, had been in discussions with the Owen Sound Transportation Company for some years regarding the need to modify the docking system, specifically the adaptation of the specially-built wooden fenders on the South Baymouth and Tobermory Transport Canada docks to accommodate the Chi-Cheemaun’s docking procedure during these times of low water but that nothing has yet been completed or even begun.

This situation is shocking and is comparable, in reference to Manitoulin Island’s other entry point, should the Province of Ontario have left its swing bridge deteriorate to the point where it would have been hazardous for people to cross it to come to or leave Manitoulin Island.

But the Ontario government did not do this and when it realized this other important link was deteriorating, committed to spending $13 million to repair and upgrade it. This has been completed.

Your government, indeed yourself in your capacity as the Minister responsible for Infrastructure, continually and very publicly boasts of ‘Canada’s Economic Action Plan’, with the subheading of ‘jobs•growth•prosperity’ and the logo featuring the three arrows dramatically sweeping upwards. The program is continually featured on television commercials and on signs where work funded by this program is taking place.

It is described as a ‘Community Infrastructure Improvement Fund’ and one of its priorities is listed as ‘Canada’s Public Infrastructure’. The program is funded at least until 2014 so your government has a clear commitment through its ‘Building Canada Plan’ to listed initiatives that include public transit initiatives and road and bridge work, among others.

Under the same program, through its ‘Strengthening Canada’s Port System’ initiative, your government says that, ‘Funds are also provided for Transport Canada to continue operations of its remaining ports in a safe manner’.

While the Community Infrastructure Improvement Fund may not precisely be the appropriate vehicle to fund the remedy for the situation at Transport Canada’s South Baymouth and Tobermory docks, it is cited by us as an example of your government’s very public commitment to Canadians regarding ‘jobs, growth and prosperity’ and also how your government has promised to improve its marine facilities of which the docks at South Baymouth and Tobermory are literal examples.

Something must be done immediately. The Chi-Cheemaun’s sailing season cannot afford to begin even a week (let alone a month or longer) later than its advertised schedule promises.

In addition to the immediate and, guaranteed, dramatic impact on virtually all of Manitoulin Island’s businesses, the service itself cannot afford to be compromised by such external forces, particularly when these were anticipated and in all likelihood could have been remedied before this Chi-Cheemaun sailing season was to begin.

The Chi-Cheemaun has recently completed an in-depth analysis of its strengths and weaknesses with the recommendation that it be specifically marketed to New Canadians in southern Ontario for whom a Northern experience is not a part of their heritage.

That’s a good thing for all of us, tapping into new markets, but this will of course not be successful if the vital marine link-the Chi-Cheemaun service-is not seen to be reliable in terms of its being able to operate according to its advertised schedule.

This is a perfect storm situation and we implore your ministry to move on an immediate fix to the docking situation, perhaps a temporary one for now, that will allow the Chi-Cheemaun to begin her sailing schedule on Friday, May 3 as advertised.

This is truly an emergency situation and we also urge you to take very seriously all of the individual expressions of concerns from Manitoulin Island that we know you will be receiving via petitions and personal appeals.