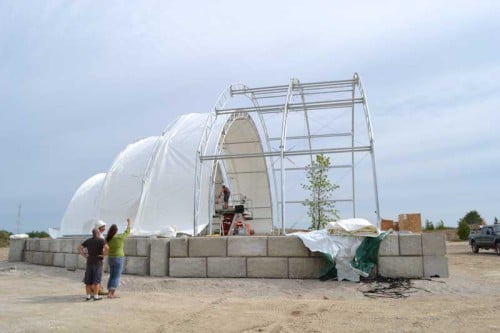 LITTLE CURRENT—This year’s Manitoulin Country Fest event, the sixth one, will not only feature a huge lineup of country artists, but will also unveil the festival’s new permanent stage at the Island’s first purpose built amphitheatre.

The Manitoulin Transport Amphitheatre stage, made possible with funding from the trucking giant headquartered in Gore Bay, will be 65 feet wide by 30 feet high by 50 feet deep and boasts a floor space of 3,500 square feet.

“We are so excited for the new stage,” exclaimed Craig Timmermans, co-organizer of Country Fest. “The stage will rival the Bell Amphitheatre (at Lake Ramsey) in Sudbury. It is a permanent, safe structure that will not only provide a venue for Country Fest, but for other concerts and festivals.”

Mr. Timmermans explained that many artists have expressed concern with mobile and temporary stages, “so that’s one of the reasons we decided to go in the direction of a permanent stage.”

“This stage isn’t going anywhere,” laughed Mr. Timmermans. “The concrete base is actually anchored into the rock through 18 sonotubes filed with concrete. We (Craig and his wife and fellow Country Fest organizer Kelly Timmermans) were joking that if a hurricane ever came through the Island, the stage would defiantly still be standing.” 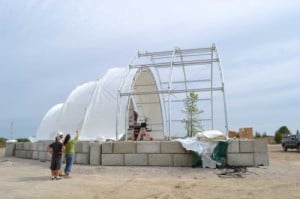 This will mark the first year of not only the Timmermans’ new stage for Country Fest, but also the first time the festival will be held in its new location on 83-acre parcel of land the couple purchased on Harbour View Road. The popular country music event has been held at Little Current’s Low Island Park for the past five years.

“We are very excited to have one, self contained location that will feature our new permanent stage, camping area, vendors and all other elements of the festival,” added Mr. Timmermans. “All the infrastructure will be in place in the future if an artist is passing through the area and wants to hold a concert or if a community organization needs a location for a festival or event.”

The Timmermans shared that the new stage was even created using local companies wherever possible.

“We were so lucky with all the Manitoulin companies that were a part of building the stage,” said Ms. Timmermans. “The only element of the project that we couldn’t source locally was the actual steel structure, but we used an Ontario company, Bright Span Building System.”

The total cost of the stage was $126,000, but as the Timmermans explained, the concrete base has a long life span, as will the steel structure and the canvas overlay will only need to be replaced every 25 years.

“The Corbiere brothers did the foundation work, Randy Noble did the prep and surfacing for the foundation, Rodney Corbiere provided the concrete, Lafarge the concrete blocks, TC Auto and Marine the equipment and the actual structure is being completed by Bright Span Building System,” Mr. Timmermans explained. “We also purchased 25 picnic tables from Manitowaning Mill Home Hardware and custom built fences (for our VIP area) from Forest Tec in Wikwemikong.”

As well as using local businesses, the Timmermans were also proud to share that they repurposed a lot of elements from the property itself in order to prepare the venue. This includes the earth they removed from the audience seating area to create the sound berms. Replanting the trees and bushes was undertaken as landscaping features and using cutdown tree trunks to create solar lampposts to light the path between the camping and concert area was also part of the project.

The Manitoulin Transport Amphitheatre is scheduled to be completed Monday, July 30, just in time for the Country Fest weekend which starts on Thursday, August 9.

A change to the festival’s lineup will see Ryan Laird replacing Marlee Scott on the Thursday night, along with Tim Hus and Jimmy Rankin. On Friday, August 10, Dallas Smith will take to the stage along with Chad Brownlee and Emerson Drive. Naomi Bristow will open Saturday, August 11, followed by Brett Kissel, Jake Mathews, High Valley and Terri Clark.

“It is very exciting to have Breakfast Television coming to Country Fest this year,” shared Ms. Timmermans. “This is the first time that the show has been in Northern Ontario and we are honoured that they are travelling here to share in our festival.”

During Breakfast Television’s visit, Country Fest will also have an open house for the community to come and check out the new venue, as well as enjoying a free community breakfast from 6 to 9 am.

“A community group will be hosting the breakfast and the proceeds from the silver collection will go to the group,” explained Ms. Timmermans.

Ms. Timmermans also revealed that ticket sales were close to breaking the 4,000 mark, but that passes were still available. For more information on Manitoulin Country Fest or to purchase tickets, visit www.manitoulincountryfest.com.