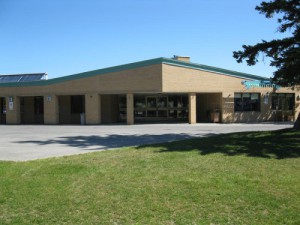 LITTLE CURRENT—Last week, the Manitoulin Centennial Manor board held a special meeting with the municipal leaders of Manitoulin to discuss the facility’s financial issues. Manor board chair Rev. Mary Jo Eckert-Tracy had previously told The Expositor that “all would be revealed” at the meeting, indicating that the Manor’s financial problems would be discussed as well as the board’s recommended course of action. However, the board instead presented a guarded front, delivering a slide show of the “high level of care” the Manor is providing its residents and underplaying the almost $1.2 million dollar operating deficiency.

The meeting had originally been called by the board to “discuss the impact of recent actions taken by the Ministry of Health and Long Term Care (MOHLTC) (financial clawbacks) regarding the financial reconciliations for prior years” and to help strategize a solution, but rather than opening the meeting with the issue at hand, the packed room of Island municipal councils and concerned community members were shown a slideshow by Rev. Eckert-Tracy discussing the Manor’s high staff morale, excellent work efficiency and low grievances levels.

Although the slideshow was informative, the question of the facility’s care level was not the issue at hand and left many feeling frustrated until the board’s financial chair took over the podium to discuss the Manor’s finances.

Financial chair Ed Bond began his presentation stressing that the Manor’s debt was only $811,906 not the reported $1.2 million, simply quoting the organization’s accumulated deficiency ($811,906) opposed to the $1,178,318 operating deficiency (as reported in the Manor’s 2011 financial statements) and assuring those present that the Manor’s management company, Extendicare, was in negotiations addressing the MOHLTC’s financial claims from 2006 to 2009. Though his sentiments were meant to be reassuring, a breakdown of the Heath Ministry’s clawbacks was not presented to the public, nor was the Manor’s auditor, who was present, asked to discuss the facility’s 2011 financial statements.

The Manor board learned of the MOHLTC’s first request for financial repayment this past spring, when Extendicare explained to the board that it had been working with MOHLTC to resolve discrepancies with the allocation of funding from 2008, amounting to a claimed $190,000. In the interim, the MOHLTC had already begun the clawback process, collecting payments in the amount of roughly $9,000 a month beginning in December 2011, to continue for 20 months until the ministry had recouped the overpaid funds.

To further complicate matters, in May the Manor received several other letters from the MOHLTC, informing the facility of other owed funds amounting to over $400,000 based on claims of overpayment in ministry funding for the years of 2006 through 2009.

The urgency of the Manor/municipal meeting was due to the fact that the clawbacks had begun, with more looming (according to the MOHLTC notices, the 2009 clawback was to begin in May and continue until August of this year, the 2006 claim in August 2012, until May 2014, and the 2007 clawback for overpayment to start October 13, 2013, ending in December of 2014).

To add to the problem, the financial amounts for 2006 and 2007 (not yet claims) had been known for several years, having appeared on past annual financial statements. The board, however, previously insisted that the amounts did not have to repaid based on verbal statements made by MOHLTC, due to the funding being spent by the province during the Manor’s provincial direction during 2006 and 2007 to bring the facility up to standards and to overcome identified “deficiencies,” the cost of which the Manor board of the time as well as municipal councils had been told would not have to be repaid.

Northeast Mayor Joe Chapman was the first to begin questioning the board, stating, “over the years, we have been told by the board that there is no problem and now here we are.”

“No one is here to criticize the staff, the facility or the quality of care,” continued the Mayor. “This financial report has a very extreme statement from the auditor and has a lot of us worried.”

Reading from the Manor’s 2011 financial statement, Mayor Chapman said, “the Manor’s continuance as a going concern is dependent on the continued financial support of the MOHLTC in the form of continued operating subsides as well as the continued deferrals of repayment requirements for prior years subsides repayable to the ministry. Should the Manor be unable to continue as a going concern, it may be unable to realize its assets and meet its liabilities as they become due.”

Mr. Bond responded that the financial report was not yet formal, as it was still a draft document and said that recent discussions with Extendicare had indicated the possibility of a reduced amount owed to the MOHLTC.

“Are there any letters?” questioned the Mayor. “Anything not written down on the back of a cigarette pack to prove that the money from 2006/2007 will not have to be repaid? If the board knew of the debt, and didn’t have anything in writing, why wasn’t there any plan in place to pay back the debt? Is there a plan now?”

Mr. Bond answered that the board was going to continue working with Extendicare and the ministry in hopes of resolving the financial issues.

“So there’s no plan,” interjected the Mayor. To which Mr. Bond replied, “your question period is over.”

Following Mayor Chapman, other members of the audience stepped forward, some offering their praises to the board for “doing the best that they can,” while others tried to grasp what the board planned to do moving forward.

“I’m with Joe (Mayor Chapman),” said Central Manitoulin Councillor Derek Stephens. “I want information. Where is the money going to come from to pay back the MOHLTC?”

Mr. Stephen’s thoughts mirrored Gore Bay Mayor Ron Lane’s unanswered question of the financial effect the problems would have on the municipalities’ annual contributions to the facility.

Rev. Eckert-Tracy addressed the concerns, reiterating that the Manor and Extendicare were in negotiations with the MOHLTC and that at this point, the board could not make any promises regarding the municipalities’ annual contributions to the Manor, but that they would “do their best” to keep it at a manageable amount.

“We are eyeball-to-eyeball with representatives from the ministry,” stated Mr. Clement. “We are having the necessary discussions and feel confident that we can work with the ministry to resolve this. We feel very confident that we can come up a with a realistic plan and have been assured by the ministry that they have no intention of closing this home (addressing a previous statement made by Mayor Chapman regarding the ministry’s possible closure of the Manor if the clawbacks were not resolved). Through our meetings so far, we know that the ministry wants to work with us to resolve this problem.”

Rev. Eckert-Tracy added that through conversation with the North East Local Health Integration Network (NE LHIN) earlier in the week, during a visit from the organization, the board has been assured by NE LHIN representatives that “they do not intend to take away any beds from the Manor.”

“When we have a plan, we will be sharing it with the municipalities,” added Rev. Eckert-Tracy.

Rev. Eckert-Tracy also explained that the previous day, the board had met with representatives from KPMG, the company developing a detailed financial analysis and operational plan for the proposed expansion of the facility outlined in the Continuum of Care Plan, in order to further determine the plan’s feasibility and that she was hopeful the study would further assist in the boards future plans for the sustainability of the Manor. Following a conversation he had had with the NE LHIN representatives, Manor board member Al MacNevin told The Expositor that representatives of the NE LHIN indicated that they would like to see a copy of the proposed Continuum of Care Plan, as well as KPMG’s financial analysis (which is to be presented to the board in the upcoming weeks).

The Manitoulin Centennial Manor board of management was scheduled to have met yesterday (Tuesday, June 5) to further discuss their financial issues with the MOHLTC.