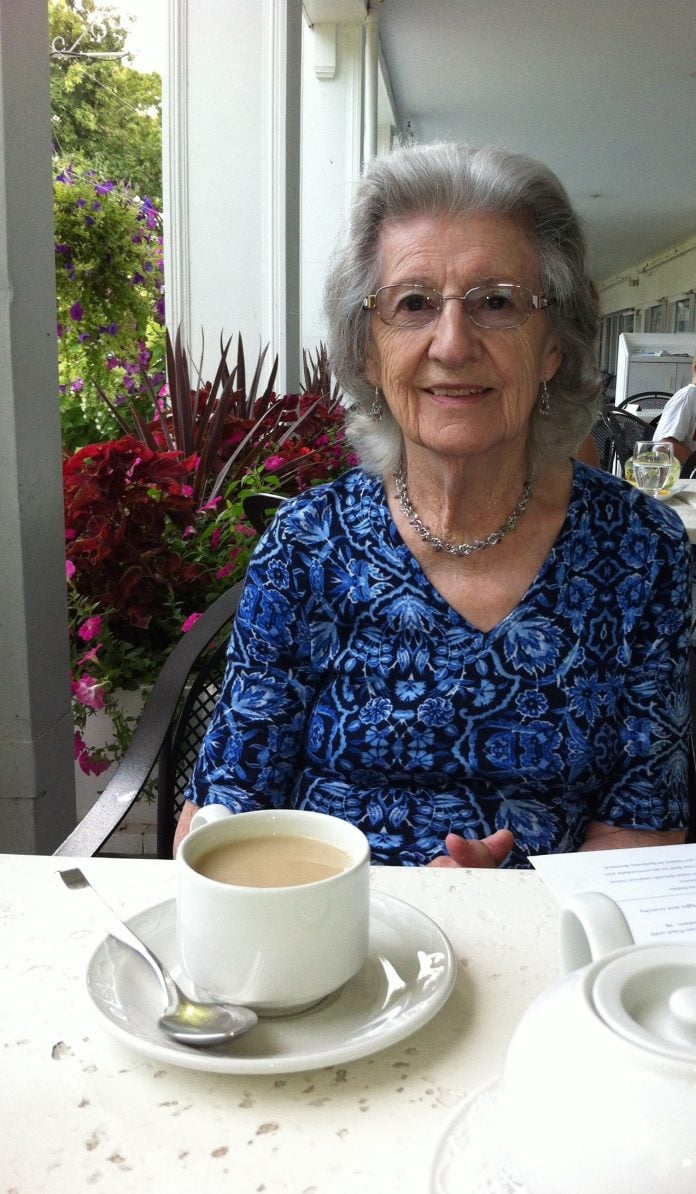 MARGARET DAVIES
(NEE EVANS)
July 30, 1924 – February 11, 2020
We are deeply saddened to
announce the passing of
Margaret Davies (nee Evans) in her 96th year at home in Toronto with her daughter Nia and son-in-law Ken
Mitchell on February 11, 2020.
Margaret was born in Blaenau
Ffestiniog, North Wales on July 30, 1924. She is predeceased by her parents Evan and Annie Mary (Hughes) Evans, husband Gwynn, sister and brother-in-law Anne and Adam Casson and brothers Ieuan Evans and William (Jean) Evans. She will be greatly missed by Nia and Ken, nephew Bryn (Anne) Casson, their daughters Kinga and Julie, and Kinga’s son Jack, and family
members and friends on Manitoulin ans in the United Kingdom, Australia and the United States. Margaret was a devoted and much loved wife, mother, mother-in-law, sister, aunt and friend. Educated as a teacher she started Kindergarten classes in Gore Bay, and, as the public school music teacher, she produced many school choir concerts and musicals. Margaret was actively involved in the Lyons Memorial United Church as a member and organist, the Gore Bay Museum, Christmas choirs, enjoying tea with her family and friends, playing the piano, and, of course, teaching her cherished piano students. Always active, Margaret played field hockey, taught Morris dancing and enjoyed climbing mountains in Wales. She and Gwynn could often be found taking walks on the boardwalk and working in their well-tended garden in Gore Bay.
Margaret was very fond of animals, in particular polar bears, penguins, ladybugs and frogs. She was also very fond of cookies and Kit Kats! Over the past several years, Margaret lived in Toronto with Nia and Ken and was able to reconnect with her Welsh heritage and language at Dewi Sant Welsh United Church where she was warmly embraced by the community. She also enjoyed many dinners and activities with Nia and Ken and their friends. We are very grateful to PSWs Nadia, Sharon and Julie, RN Andrew and Dr. Roy of the Dorothy Ley Hospice for their compassionate care. Celebrations of Life will be held at Lyons Memorial United Church in Gore Bay and at Dewi Sant Welsh United Church in Toronto at a future date. Cremation has taken place. Donations in memory can be made to Lyons Memorial United Church, Gore Bay
Museum, Gore Bay Medical Centre or the Children’s Wish Foundation.