“Today, I was going through some papers from previous meetings, and found the society’s long-term objectives, the first being to attain this property,” stated Ed Sagle, president of the MBHS at their annual meeting on June 14. “It took 22 years, and it took a lot of waiting and patience. We did very well to keep the organization operating.”

“We thought when we first started looking at purchasing the property that it would take one or two years to attain it but we quickly realized this was not going to happen,” said Mr. Sagle. He told The Expositor, “this all started with a conversation I had with (the late) Bryan Gleason. He said one day, ‘I would love to have something in place for Michael’s Bay.’ And, I said ‘why don’t we get an organization started to look at purchasing the property?”

“I would like to welcome everyone to our annual meeting,” said Mr. Sagle. “This is the first annual meeting we have been able to hold for the past couple of years,” he said, pointing out, “we have lost a couple of former members since out last annual meeting, but we have also accomplished quite a bit as well, mostly to do with purchasing the land.”

MBHS reached a deal with the federal government to purchase the former plot of the town, including burial sites within the area, the culmination of more than two decades of steady work by advocates seeking to preserve the history of the area. The land purchased is approximately 50-60 acres in size.

Prior to the negotiation on the purchase, “I had phoned Ottawa (Public Services and Procurement Canada) about the purchase  and they said that Wiikwemkoong (Unceded Territory) was not interested in (purchasing) the property,” said Mr. Sagle. “The lady I talked to told me that we should make it known in a letter that we were interested and to throw out an offer to them.”

Mr. Sagle pointed out by the time the MBHS had paid the purchase price, legal fees and taxes the purchase was over $7,000.

“That is pretty reasonable,” stated board member Eleanor Lentir.

“The other thing I am quite happy is that Jean McLennan, who had been involved in all of this, was still alive to hear that the property had been purchased,” said Mr. Sagle. “She always said, ‘whatever you do, do something with that property’.”

“So, the next question to be asked is, what are we going to do with the property?” said Mr. Sagle, noting his nephew, who is a surveyor, “will be coming to Michael’s Bay and will be plotting out the property so we can plan out the streets and properties,” continued Mr. Sagle. “We own 80 percent of the property to the gravel pit and 50-60 acres to the river and over.”

“The first thing we need to do is have the surveyor carry out his work and find out where everything is, and then go from there,” said Ben Lentir, vice president of MBHS.

Mr. Sagle explained that, now that MBHS owns several streets in the old town, including King Street, “there are all kinds of different things we can look at doing. My nephew will lay everything out on a big map where things are, then we can look at a cleanup and eventually putting up street signs and plot out where the buildings were on the property.”

“We can plot them out and maybe we will be able to restore a couple of the buildings,” said Mr. Sagle, noting that when the original houses and buildings were constructed, they were board and batten houses. If you look at where the old mill used to be, there is a sluiceway and maybe we can get Manitoulin Streams Improvement Association and the ministry (natural resources) to help us out and maybe restore this.”

“Maybe, in time, we can have an information booth built in the area. The only problem with the property right now is that people think the property is not owned and can be used for camping and fires,” he added.

It was suggested the property could be fenced and gated off.

“With a sign that indicated who the property belongs to,” said Mr. Lentir.

Once the surveyor has completed his work, Mr. Sagle suggested a work day can be scheduled to clean up the property. “We would probably get a lot of people out to help out. And we need young volunteers to help out, and some people who have and can use a chainsaw would be welcome,” he said, noting that there are cedar trees as tall as 10 feet in the middle of the property.

“We need to clean up the cemetery areas as well, but at this point we don’t know what all the regulations would be about cleaning up the trees and other things in the cemetery areas,” said Mr. Sagle. He pointed out that MBHS will be able to apply for funding for future projects. The MBHS is a registered not for profit corporation.

“The OHS (Ontario Historical Society) is willing to help and would be able to guide us as to who we should be contacting,” said Mr. Lentir.

“Rob Leverty of OHS was so happy that we got the property,” said Mr. Sagle. He suggested another thing that could be looked at is having a hiking trail set up from Michael’s Bay that could stretch right through to South Baymouth.

Paul Bowerman, MBHS treasurer informed the group later in the meeting the actual total cost to purchase the property was $7,459.32. He said the group has almost $9,000 available for the group to use as of May 19. A motion was moved by the MBHS membership to accept the treasurers’ report.

Nominations and elections for executive positions was then held, with Mr. Sagle agreeing to remain as president, Ben Lentir will remain as vice-president with treasurer Paul Bowerman and secretary Jane Tilston to continue on for another term.

“I think we will be getting a heck of a lot more interest from more people now that we own the property,” said Mr. Lentir.

“The first thing we need to have done is to get the survey done so we know where everything is located. Then we can get a plan done of what we want to do on the property,” said Mr. Sagle.

The MBHS meets on the second Tuesday of each month at 7:30 pm in the South Baymouth museum. 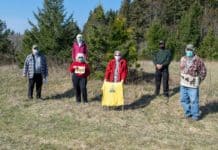