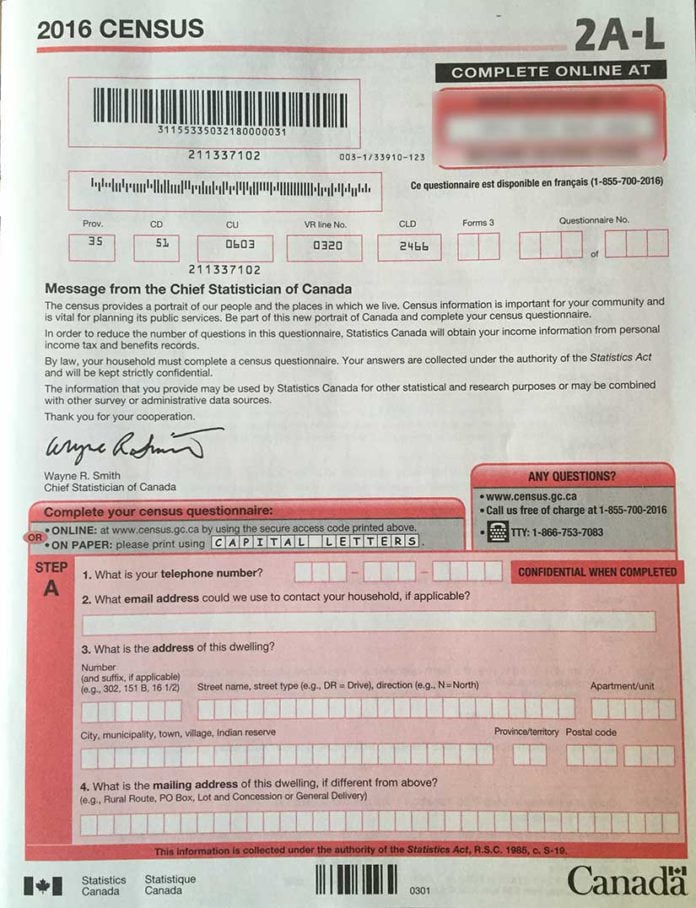 SUDBURY—The impact of the replacement of the mandatory long form census with a voluntary version five years ago has hit Northern Ontario communities much harder than those in the south. This information comes courtesy of a Northern Policy Institute (NPI) publication ‘Getting the Small Things Right: How data suppression and provincial reporting distort Northern realities.’

“This move resulted in a survey that lacked the ability to produce sufficiently high quality socioeconomic data that many rely upon, particularly for conducting analysis at the local level.”

Without such detailed data, policy makers are often left flying blind, or perhaps even worse, relying on ideology and anecdotal observances to inform their choices.

The long form census is back, which was one of the objectives of the NPI publication, but that return alone is not enough to offset the data quality challenges facing the North.

“We can fill in the missing year for longitudinal studies,” said NPI President Charles Cirtwill. “But even before the change our data in the North was sparse.”

Because populations in the North are both thin on the ground and cover a lot of ground geographically (Northern Ontario comprises nearly 95 percent of Ontario’s landmass but only 6.5 percent of the population) Statistics Canada’s data suppression policies have a disproportionate impact on the North, with its smaller municipalities and numerous reservations.

Funding limitations at Statistics Canada also come into play, as implementing the deeper number of questionnaires in such areas (as is done in PEI, which also has data suppression issues) to offset low response rates has not been applied in Northern Ontario.

The impact of these shortcomings comes into play with a vengeance for municipalities and other organizations trying to make a case for grants or program funding to meet the region’s needs.

There are 145 suppressed and 84 partially suppressed census divisions out of 574 in Ontario. In Northern Ontario’s case there are 278 census subdivisions, 144 being incorporated municipalities and 118 aboriginal reserves, while 16 are unorganized townships. Of those 278 subdivisions, a full 107 were suppressed in the 2011 National Household Survey (NHS). That’s a whopping 38 percent. By comparision, only 13 percent of southern Ontario communities are suppressed. Of the 145 suppressed divisions in Ontario, 74 percent are in the North.

Northern Ontario’s issues and concerns are demonstrably different than those in the south, or would be so if a regional data set was available—which highlights the other data shortcoming identified in the NPI document, a lack of regional datasets for Ontario.

If the Northeast and Northwest had separate datasets, and this is the easiest option to implement, much of that information identifying those different needs would be invaluable to policymakers.

To put that in greater perspective, the names of those suppressed districts include Perry and Seguin, Marathon and Manitowadge, Sables and Spanish River and French River—over 17,000 people in those six communities alone—and that leaves another 101 suppressed census subdivisions to be accounted for across the North.

Unanswered questions, such as the unemployment rate in Nipigon, the average income in Englehart and how many immigrants live in Killarney, as one economist described it in the report, “is like driving with a blindfold on.” As the report points out, “it is impossible to implement sound public policy if Northern Ontario can’t identify the challenges it is being confronted with.”

“Creating a set of regional economic accounts is equally important for understanding economic growth,” noted Mr. Cirtwill. “Particularly since Northern Ontario is fundamentally different from the rest of the province in so many ways.”

The report points out that while the gap in the NHS mandatory data presents one challenge that can be overcome, the same cannot be said for the more “permanent” lack regional accounts. That has “left the region unable to identify other important economic trends and characteristics. By not having a set of economic accounts for Northern Ontario, it is implicitly assumed that economic dynamics in the region are moving at the same rate as the rest of the province.” That is demonstrably not the case.

Too often programs that are highly successful in the North and not in the south are presumed to be failures and dropped, noted Mr. Cirtwill.

For now, the return of the mandatory long form census is great news for the North, but there remains a long road ahead to garnering the kind of datesets that those making policy for the North require.