MANITOULIN-After the Municipality of Central Manitoulin added its voice of concern to those of neighbouring municipalities Assiginack and Tehkummah, the provincial Ministry of Transportation has announced it will not use the herbicide Garlon XRT anywhere on Manitoulin Island.

The powerful herbicide, used in spray form, is an effective way for the MTO and other agencies to control roadside brush on its right-of-way.

On the downside, though, the product’s manufacturer, Dow AgroSciences Canada Inc. states on its label that, “Garlon XRT is highly toxic to fish, aquatic plants and aquatic invertebrates.”

The product had already been banned for use in the Municipality of Assiginack after concerned citizens brought the issue to the previous council’s attention about five years ago.

Tehkummah does not want it used on its roadsides either.

Last week, the Township of Central Manitoulin also banned Garlon’s use within the municipality and on Monday afternoon this week, The Expositor received an email from the Ministry of Transportation that reads, “The Township of Assiginack advised the ministry that they have a bylaw prohibiting the use of herbicides and requested the ministry not to proceed with the planned spraying in their municipality,” Adrian Sgoifo, a media relations officer with the MTO stated. “In light of this local policy, the ministry has decided not to spray on Highway 6 through the municipality. Similarly, other townships in this area, including the Township of Central Manitoulin, have also asked the ministry not to spray herbicide along their rights-of-way within their townships. In light of the concerns expressed by the townships and relatively small areas to be treated, the ministry has decided not to proceed with any of the planned spraying on Manitoulin Island at this time and will be considering alternative methods to keep the rights-of-way clear.”

This comes after the June 23 Central Manitoulin council meeting where council passed two motions. Firstly, for municipal staff to “immediately” contact the MTO and ask for Garlon not to be sprayed and second, to prepare a bylaw to ban the spraying of herbicides and pesticides in the municipality.

“We had a fair number of calls and emails from concerned residents of Central Manitoulin,” said Reeve Gerry Strong.

During that same meeting, council also heard from Manitoulin Streams and the Lake Manitou Area Association.

“The reasons for our concern over the spraying of Garlon are numerous,” wrote Manitoulin Streams project coordinator Marcus Mohr in a letter to council. “Summed up, we think it could amount to a highly toxic spill into our local rivers and lakes; the same rivers and lakes from which we draw water, catch and eat fish and that our families swim in. Even the producer of the herbicide, Dow AgroSciences Canada Inc., states on its label ‘Garlon XRT is highly toxic to fish, aquatic plants and aquatic invertebrates’.”

“Manitoulin Streams is very pleased with the positive outcome regarding the Ontario Ministry of Transportation’s decision not to spray Garlon,” Mr. Mohr told The Expositor. “The alternative methods MTO will use have not been discussed at this point, but we hope that they will find a suitable non-toxic substitute,” Mr. Mohr added.

“It’s good news,” said Sandfield farmer Al Tribinevicius echoed. “We don’t need that kind of stuff in our systems here. I’m happy—that’s all we wanted to do.”

“This is the right decision,” said LMAA president Mike Costigan. “This will keep our Island pristine and the people healthy.”

The LMAA had also sent an email to Central Manitoulin council suggesting that Garlon XRT not be sprayed in the municipality.

“I’m sure glad it happened,” he continued, noting the crossing of turtles on Silver Bay Road from Moody’s Creek last week in their annual search for nesting sites. “They (the MTO) didn’t give a thought to the wildlife and habitats this would have an effect on.”

The issue came to light last month when an Expositor reporter read about the MTO’s imminent plans to spray the herbicide along areas of its rights-of-way on Highways 6 and 542 and contacted the reeves of Assiginack, Tehkummah and Central Manitoulin for comment. 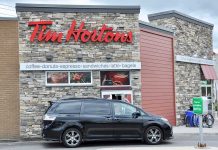