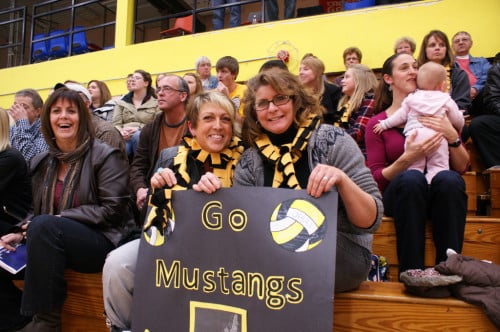 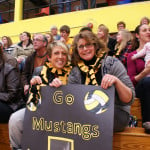 After a few moments of shock and disappointment, the crowd, which packed the stands and the gallery, began to applaud not just the defeated Mustangs, but also the winning Storm.

The sets had been tightly contested, with points trading back and forth. Manitoulin took the first set with a close score of 25-23, but the Storm took the next, even though the Mustangs rallied from 18 points to reach its final score of 22, all while the Storm sat at 24 points, a point from victory.

With a set each under their belts, the Mustangs and Storm moved onto the third, shorter set. Both sides held the lead several times, going back and forth, before Manitoulin was in the lead with 14 points. Unfortunately for the Mustangs, the Storm rallied, coming up from behind to tie and then defeat the home team.

The Mustangs had finished second in their pool after a strong four games. Even though they had lost the first game on November 24 at Wasse Abin High School (WAHS) to the Woodville Christian High School Cavaliers, they didn’t go down without a fight. The Cavaliers won the first set in a close 25-23 set and the Mustangs took the second 25-22. It was the third set, again, that proved the ‘Stangs’ undoing as the Cavaliers pushed past MSS to win 16-14.

Later that day, Redeemer Christian fell to the Mustangs with set scores of 28-18 and 25-17. Though the team, hailing from Nepean, had won its division in a surprise underdog victory in Ontario Federation of School Athletic Association (OFSAA) play, they didn’t recover quickly from their superb blocking and the Mustangs took advantage of the gaps on the court to drive the ball home.

The Mustangs travelled back to home court for the final game in regular tournament play, against École Secondaire Publique Marc-Garneau Astros. Again, the Mustangs dominated the court, sending the Astros home with two set losses, 25-20 and 25-15.

Unfortunately for the Mustangs, even though the strong play seen throughout the regular tournament play continued into the quarterfinals, the Smithville Storm had played equally strong, finishing first in their pool.

Thomas Potac, a Grade 12 student playing for the Storm, spoke to The Expositor following the final set.

“It was pretty crazy,” he said with a grin. “It was way too close. (The Mustangs are) wonderful guys and it was pretty close. Technically, we’re the same.”

Thomas said the reason why the Storm had managed to finish ahead of the Mustangs was because of the mental game.

Peter Kategiannis, tournament convenor and the senior boys’ volleyball coach, had nothing but praise for his team when he spoke to The Expositor three days later.

“We just fell short of our goal,” he said. “I can’t even remember losing a game when we’ve been up 14-11. It usually means you’ve wrapped it up. You have to give the other team credit. They played so well.”

Mr. Kategiannis was unabashed about the emotion the close game brought out in both him and his team.

“It was tough,” he said. “Everyone knew that. You could see practically grown men crying. Afterwards, I told them all to not hang their heads. I told them I was so proud of them. We didn’t lose to a second-rate team.”

When heading into OFSAA, Mr. Kategiannis said that at times, it was easy to pick out a clear-cut winner.

“Not this time,” Mr. Kategiannis said. “Any of the eight teams that advanced could have been gold medal winners. Everyone was really, really good.”

The Storm fell in the semi-final match against Mère-Teresa, who in turn was defeated in the gold medal match by Quinte Christian High School. The Woodland Cavaliers, the only team to defeat the Mustangs in tournament play, placed third after a tight battle against Smithville.