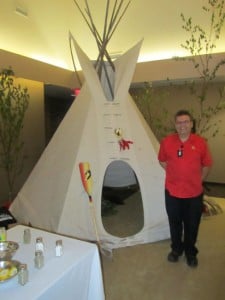 The Manitoulin Hotel and Conference Centre, the project supported by six Manitoulin and area First Nations communities and spearheaded by the Great Spirit Circle Trail, came to life last week when it hosted a major four-day tourism business conference, was the venue for its first wedding reception and provided accommodation to 30 delegates attending a two-day meeting of the Ontario Trillium Foundation’s Northeastern Ontario grant review team.

The new hotel, the first one built on Manitoulin in over a century, is open for business in its prime location just past the swing bridge and adjacent to the Manitoulin Tourism Association’s Welcome Centre.

“I don’t look for big, fancy houses but I do look to see if people are caring for their homes, keeping them neat, to see if the band office and other community buildings are well cared for as these things reflect pride in the community and I was pleased to see that all of these communities were looking after themselves with pride.”

His praise for the notion of a major project like this hotel was lavish and he said it was unique in Canada that six local First Nation communities had come together to cooperate on a major project, and, just as significantly, that the project was not located on a First Nation, joking (to much laughter) that it was unusual for even two First Nation chiefs and councils to agree on something.

Chief Louie predicted that the Manitoulin Hotel and Conference Centre would be a model project Canada-wide and had much praise for the visionary leaders who had conceived of the project and had brought it to completion.

Chief Louie said repeatedly how successes such as this one are in fact successes for the Native community all across Canada, at the same time directing remarks to the hotel staff, telling them to be first-rate in their jobs because their efforts “will reflect on First Nations people right across the country,” also telling them that “the success of this hotel venture will help other Native people along the path to success.”

Chief Louie was fervent in his beliefs that the aboriginal community across the country must work cooperatively, building on each others’ successes.

As a business leader, Chief Louie speaks from experience. He has been chief of the Osoyoos First Nation for more than 25 years and, he explained, in that time his community has developed and fostered many businesses, (which also include a hotel in addition to a golf course, vineyards and many other ventures).

He stressed that First Nations and their leaders must work to develop a business mentality and get away from dwelling on past injustices as a priority.

During his two-day stay on Manitoulin, he had been a guest of Birch Island, Aundek Omni Kaning and M’Chigeeng First Nations and had toured each community and met with the local leadership and band members in each community.

“I don’t look for big, fancy houses but I do look to see if people are caring for their homes, keeping them neat, to see if the band office and other community buildings are well cared for as these things reflect pride in the community and I was pleased to see that all of these communities were looking after themselves with pride.”

Chief Louie singled out two First Nations icons-Dawn Madahbee and Reggie Leach-whose wedding was to be the upcoming weekend, wishing them every happiness but also pointing out their importance, as individuals, to the First Nations people of Canada.

“Dawn, the executive director of Waubetek Business Development Centre, has crossed this country so many times and has given so much business help to Native people,” he said, continuing that “Reggie Leach remains the top draft pick ever (third overall) among First Nations players entering the NHL and the record he set for the most goals scored during a Stanley Cup playoff series still stands nearly 40 years later. As well, Reggie won the Conn Smythe trophy for most valuable player in a playoff series on a year that his team (the Philadelphia Flyers) didn’t win the Stanley Cup and that record also remains: he was deemed to be the best player in the series, playing for the non-Stanley Cup winning team. He was a key member of the 1975 Stanley Cup championship Philadelphia Flyers.” 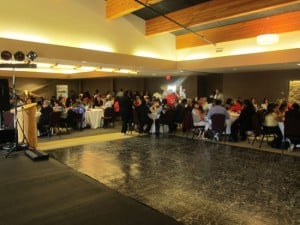 Dawn Madahbee and Reggie Leach were married last Saturday and their reception was the first wedding event at the new hotel.

Kevin Eshkawkogan, CEO, of the Great Spirit Circle Trail and the individual tasked with the enormous puzzle of achieving community support and getting the project built, summed up the practical and local importance of the new facility, echoing Chief Louie’s observations.

“A project like this creates employment for our people so people won’t have to leave to find work,” Mr. Eshkawkogan told the evening gathering of more than 200 people.

The new Manitoulin Hotel and Conference Centre and the Great Spirit Circle Trail “have 60 to 70 employees,” he said, “and in this (hotel) project, over 90 percent of the staff are from our communities.”

“It’s here. It’s built. And we own it!” he concluded to applause.

Mr. Eshkawkogan and his wife Melissa were given the surprise gift of a Carl Beam painting by the Great Spirit Circle Trail staff and board membership in recognition of the many hours he has put into the hotel project and the corresponding time he has had to be away from his wife and young children. The painting was presented to Mr. and Mrs. Eshkawkogan (it was also her birthday) by Melanie Debassige, secretary-treasurer of the Great Spirit Circle Trail board on behalf of the board membership and staff. 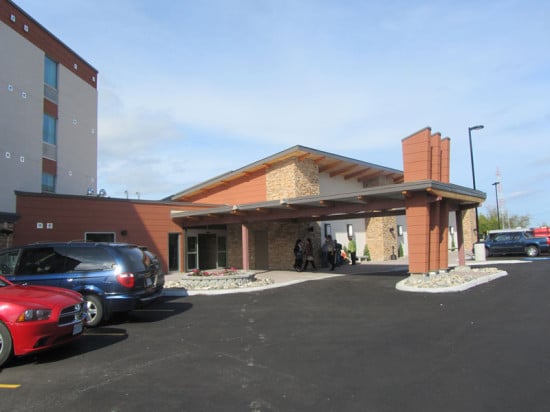