Gore Bay’s prolific marine historian and author will be missed

GORE BAY – Friends of George Irwin (Buck) Longhurst will remember him as being a prolific marine historian and author. He had a great sense of humour and besides his family, his greatest passion was very much marine history.

“We were good friends and we are sure going to miss him. I don’t know who we are ever going to be able to get to take over his position as curator of the (William Purvis) Marine Centre in Gore Bay,” stated George Purvis.

Mr. Longhurst passed away in his 76th year on October 12 in Sudbury in the cardiac care unit at Health Sciences North Hospital with his family at his side. He lived in Gore Bay with his wife Eldene.

“I got to know Buck well after he moved to Gore Bay,” said George Purvis. He pointed out that Buck wrote several books, including the history of the Purvis Brothers Fisheries. “I helped gather some pictures for the book and he wrote the book. He did a great job.”

As a young person Mr. Longhurst had spent many summers in Sandfield. After high school, Buck went into the Navy until Canada’s defence forces were amalgamated in 1965.  Then, he became a letter carrier and supervisor until 1970 when his life changed on meeting Jack Purvis on the waterfront in Sault Ste. Marie.

“He started working with us in the late 1960s, working with us for several years, when we were putting the business together,” stated Jack Purvis, of Purvis Marine Ltd. in Sault Ste. Marie. “He was a crane operator but he became known as the Purvis Marine historian, working on several books with Skip Gillham.”

“Buck was a boat fanatic,” said Jack Purvis. “I can remember a boating adventure when we brought the tugboat Avenger back to the Sault from Gravesend, England. He even produced a book on this trip. He was always a great asset for us and he was a really nice guy and a really good friend.”

“I can remember when he started at the Canada Post office as a letter carrier in the Sault, he would always be getting into trouble with his bosses because he would get everything done but he would take shortcuts on his route; he was anxious to get back to us and play on the boats,” quipped Jack Purvis.

Jack Purvis is originally from Gore Bay, “and Buck and his wife Eldene and myself and my wife would keep in touch after they moved to Gore Bay. Eldene was a librarian in the Sault when they first met up. His mother had a store here in the Sault and his father worked for the city.”

Mr. Longhurst wrote a column, ‘On The Lakes,’ for many years in the Manitoulin West Recorder. “It was an excellent column and I can’t tell you how much I learned by reading his column. Buck’s knowledge on marine history was phenomenal. He had a great sense of humour and I really used to like talking to him about the Sault, my hometown. We would reminisce about places, people or things in the Sault. Again, he had a tremendous amount of knowledge on the history of the city and people he knew.”

Buck was a lifelong Great Lakes shipping enthusiast and he worked as a hoisting engineer and mobile crane operator with his crane, Dino the Dinosaur, at Algoma Steel, loading ships. He spent many hours chasing boats around the Great Lakes to get the perfect picture for his collection.

Buck and Eldene moved back to Manitoulin in 2004, where they had lived ever since.

In his spare time, Buck authored more than 15 books including several books exploring the histories of smaller Canadian shipping companies, among them Purvis Marine Ltd., A.B. McLean and Sons, the Abitibi tugs, Yankcanuck Steamship Co., and “The Last boats on the Turkey Trail,” about vessels that travelled the route from the North Channel (above Manitoulin Island) into the St. Mary’s River, named for the many courses which zigzag through the area’s islands, shoals and ports. His usual co-author was the late E.B. “Skip” Gillham; however, he also co-authored a history of Algoma Central with Rod Cunningham. Both were honoured by the Marine Historical Society of Detroit as Historian of the Year.

Buck worked hard to help establish the William Purvis Marine Museum where much of his massive marine collection is now on display.

“I used to see all these old boats out there,” Buck told The Manitoulin Expositor in a 2018 interview. “With the opening of the St. Lawrence Seaway, all the little canal boats, the small upper lakes boats, were disappearing. I started taking photos and whenever I got a vacation I’d be at Sarnia or the Welland Canal taking pictures or getting rides on boats and taking more pictures. My hobby turned into an obsession.” As he towed ships to their final resting places in the scrapyard, he would salvage unwanted name plaques, keys, flags, logbooks and brass railings to add to his growing personal collection.

Buck will be cremated. As per his request there will be no service.

Donations to the Kidney Foundation of Canada or the Gore Bay Manitoulin Lodge Angel Bus would be greatly appreciated. 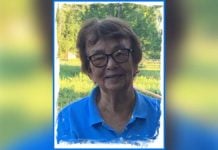 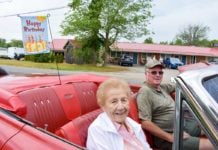 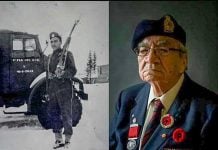