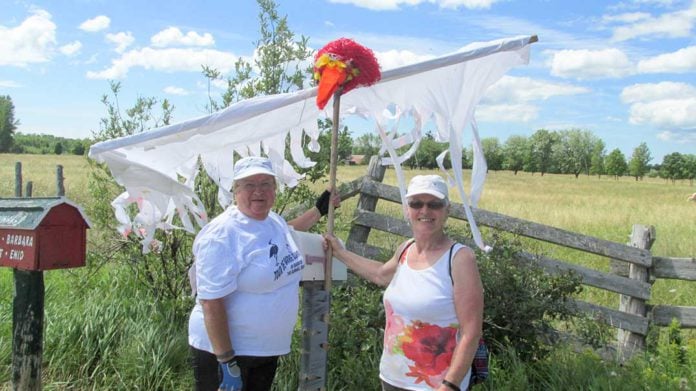 BARRIE ISLAND—The ‘Tour de Barrie Island-In Search of the Sandhill Crane’ event gets family, friends of the community, many from off-Island together, travelling the roads of Barrie Island by foot, bicycle or all-terrain vehicle.

“My sister Gloria and I had been attending a jazz festival in Montreal,” said Carolyn Lane-Rock, one of the main organizers of the Tour. It was after a parade they attended while there that “we got the idea of making a large Sandhill crane using a javex bottle and holding an event like this.”

The homemade Sandhill crane was spruced up for this year’s event (held last Saturday), which not only provides a search for Sandhill cranes, but also promotes and improves health while providing a unique social occasion for friends and family to get together for dinner afterwards.

Among the many people on hand for this year’s tour was Dayne Tipper, a Manitoulin Special Olympics athlete.

The tour is always started with the launching of an arrow, which was carried out this year by Ted Lane (Ms. Lane-Rock’s brother).

“We only saw one Sandhill crane in total this year,” Ms. Lane-Rock told the Recorder after the event. “There was only one seen; it was too hot of a day and they hide under the trees to get shade when it is as warm as it was.”

This year’s participants included 17 bicyclists, 19 walkers, six persons on all terrain vehicles and a total of 53 people on hand for the dinner held at the end. “A lot of people just come out for the dinner and listen to jokes all night,” said Ms. Lane-Rock.