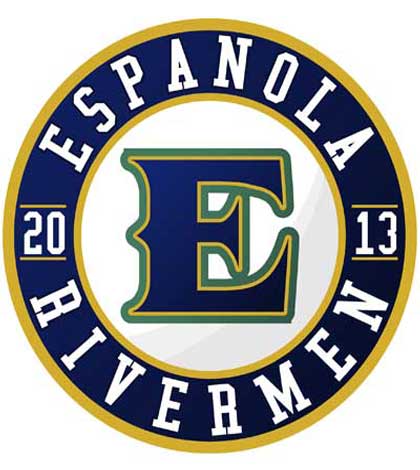 ESPANOLA–Game action in the Northern Ontario Junior Hockey League saw the Espanola Rivermen with one win and one loss this past weekend.

Playing in their first annual ‘Pink in the Rink’ night in support of breast cancer research, the Rivermen didn’t disappoint as they slipped past the visiting Eskimos.

Brennen Dubchak opened the scoring, on the power play, 3:47 after the opening face-off to put the home side up one only to see Abitibi’s Ryan Wildman supply a man advantage marker of his own two minutes later to tie things up.

Robert Smythe put Espanola back on top before the session was complete however making it 2-1.

The Rivermen then extended their lead early in the second stanza with Corbin Bean striking shorthanded.

Special teams saw the Eskimos pull back to within one on a power play effort from Brady Clouthier at 15:42 only to see Daniel Robertson score for the Rivermen 23 seconds later in his first game with the club.

Erik Robichaud supplied the third man advantage tally for Abitibi early in the third to make it 4-3, but Brad Edwards iced it in the final seconds for Espanola.

Joakim Jutras turned aside 36 of the 39 shots he faced to earn the win for the Rivermen as they improved to 12-7 on the season.

Brody Wagner faced 45 attempts in a losing cause for Abitibi who dropped to 8-8-0-2.

The Espanola Rivermen clinched the game 5 – 3 over the Abitibi Eskimos.

On Saturday, November 30, the Rivermen headed to Sault Ste. Marie and the Essar Centre to take on the league-leading Soo Thunderbirds.

Sault Ste. Marie continued to roll as they registered their 27th point out of a possible 28 in their past 14 games as they topped Espanola at Essar Centre.

Thunderbirds captain Gavin Burbach put the home team up 1-0 with the only marker of the opening stanza.

Burbach then set-up Nicolas Tassone for the lone tally of the middle frame to increase the T-Birds leads after 40 minutes.

Brandon Janke’s team-high 31st point of the season, which also knots him for the NOJHL lead, pulled the Rivermen to within one early in the final session, but Brett Jeffries ice it for the Sault with four minutes to go.

Gongshow Gear player of the month for October Joel Horodziejczyk won his eighth straight start to register the triumph for the Thunderbirds making 24 stops in total helping his side improve to 18-2-0-1 on the campaign.

Marc Terriault kept his club in the game as he saw 37 shots fired his way in a losing cause for Espanola as they dipped to 12-8 overall.

The final score, 3 to 1 for the Thunderbirds.