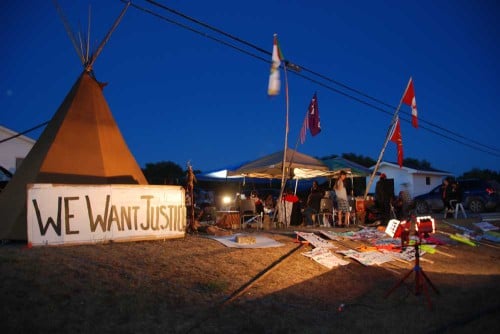 Well it seems we are at an impasse in regards to the protesters following the last meeting we had with the protesting council members representing their followers.

Mr. Assinewai insisted on having community members having a say in our Band government affairs of ‘Sheguiandah First Nation.’ As it stands, the majority of protesters are “non-members.” The position of the leadership is this was a recipe for disastrous consequences. The easiest way to hurt one is by what words come out of another’s mouth. Whereas we may never see these protesters again. The only ones that have a say is band members. This is their community, their future. When all is said and done, these protesters will probably never be seen again. If non-status or community members don’t like the way the community is being run or going, you have every right to leave and to go back where you came from or perhaps find a community where this behaviour is acceptable.

Letters and calls for help were sent out stating this group was under siege. My question is by whom? Again, this is a far fetched cry for help. When one looks at the real world the resistance in Syria at times comes under siege by government forces.

Hardly any type of comparison, but this group wants to make it sound like there are people dancing around on the road or in their area of protest with clubs. My instruction to the community is to avoid the area. Try to ignore such nonsense and people. Many protesters come and go home at night, sleep in a nice warm bed, even have the occasional drink or bender. How could these people possibly be under siege? People that were protesting in Toronto’s St. James Park never left the park until they were dragged out by order of the city.

There are those who claim to be representing a group known as AIM (American Indian Movement), an organization that came to life (existence) in the 60s. This was a result of turmoil on the Pine Ridge Reservation in South Dakota. No such conditions exist here in Sheguiandah—only fabricated and imagined conditions. There are certainly no founding members present. I don’t think they would involve themselves with gossip, lies and such foolishness. During a big wind this teepee blew over, now isn’t that a powerful message brought by the spirits? Perhaps in order for the public to fully understand, they need to watch a movie called Thunder Heart starring Val Kilmer.

People are blaming the chief for cutbacks proposed by the Ontario Government’s Ontario Works. People should be protesting both levels of government. Not once has any of these protesters ever wanted to go protest these changes when they had the larger rallies. If they were to do this I would be in full support. It seems like people want the band to pay their bills. One of our friends who is head of the Native welfare administrators association said he heard a government official stating how to kill a person. “You pay them to do absolutely nothing.” The same goes for how to kill a people: pay them to do nothing. To me this is one of the underlying problems. No one wants to change this or even pay their bills. Everyone has to find the difference between empowering and enabling.

Being on council and looking at the community, one of the things I have shared with the people was that they must surely hate themselves with all the energy that is needed to keep them in this state of mind. This energy is wasted, the same that is happening now. The people don’t want to deal with their issues, their anger and bitterness. They want to remain the victim. It’s easier to blame others than to take control of their lives. The sad thing about this is that all of this sickness is being passed down to their children, a term known as lateral violence.

It’s a sad thing to see these people out of desperation telling lies and gossip. Perhaps you should allow the world to truly see who you are. In closing, our First Nation is opening a website so the truth will be shared with not only our community but with the whole world. How is that for transparency? The website is www.sheguiandah.com.

One real elder from Manitoba shared a teaching with me, so I share it with the protesters. If you’re following these spiritual ways and you start doing wrong, and you know it’s wrong and you don’t do anything to correct it, then your children will pay for your mistakes.