Last week’s editorial (Tories response to posties augers ill for civil service wage debates) was ‘right on the money’ in alerting the public to what may be expected from a Stephen Harper majority. It appears certain that our new, Tory masters will not tolerate much dissent from ordinary folk.

The recent election was a classic example of a politically astute prime minister at his very best, managing to gull the electorate into handing him a majority. Mr. Harper ran a campaign during which he consistently refused to answer questions relating to policy, at the same time he got away with slagging the opposition, particularly the Liberals, by means of vicious but largely untrue attack ads. By such actions the Conservative party drastically lowered the tone and quality of political debate in Canada. The end result was, however, exactly what Mr. Harper wanted—a liberal vote hopelessly split between the Liberal and the New Democratic parties which ensured his majority despite the fact that 60 percent of the population voted against him.

It seems clear that the two main opposition parties must now recognize the changed political landscape and act accordingly. They need to join forces and hammer out a common, left-of-centre platform now and this surely means that the Liberals had better forget their sense of wounded pride and the NDP had better get over their (quite understandable) current sense of hubris. Both parties need to steal a page from the Tory playbook. (Remember how Mr. Harper united the Progressive Conservative and the Reform parties?) I hope that New

Democrats and Liberals recognize that if they make the foolish mistake of remaining separate entities, the 60 percent of Canadians who disagree with

Stephen Harper’s mean and narrow-minded approach to governance will remain a largely silent and disenfranchised group for years to come!

Moreover, Canada will quickly lose its reputation (already under threat with Mr. Harper at the helm) as being a fair-minded democracy where reason triumphs over ideology! 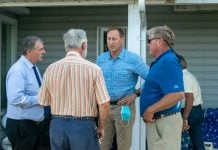