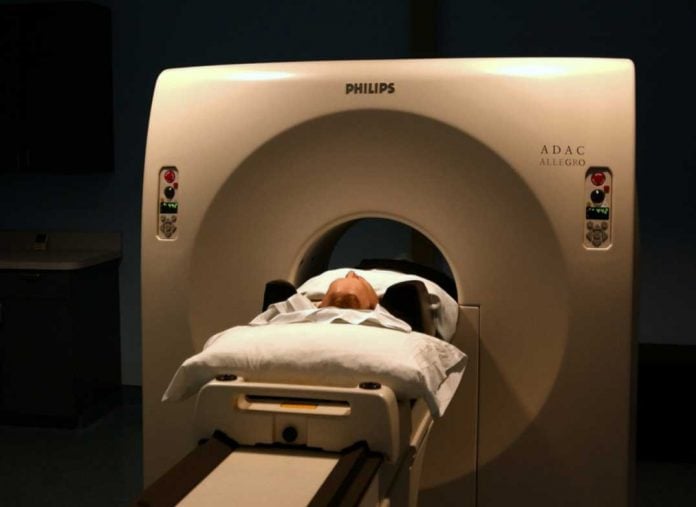 SUDBURY—The final pieces of the puzzle have fallen into place for a PET (positron emission tomography) scanner in Sudbury with the surprise November 8 announcement that two anonymous donors had stepped up to provide the last $1 million needed to build the facility.

“It’s been a pretty good week,” admitted Sudbury MPP Glenn Thibeault when contacted by The Expositor for comment. “In less than two years we have managed to put in place the operating funds, the capital costs, it is exciting for us as Northeasterners to have access to this important lifesaving medical equipment.”

Mr. Thibeault had campaigned vigorously for a PET scanner for Sudbury while a member of the Federal NDP and had taken considerable flack from his former colleagues on the file when he became a member of the provincial Liberals.

The MPP was quick to congratulate others for making the project a success, however. “Not only was Sudbury rallying behind this project, but communities from all across the North really stepped up to make this happen,” he said. “We had donations coming in from communities on the Island and from north of Timmins. People recognize the benefit of not having to travel to Toronto to get the tests.”

That barrier of travel goes beyond mere inconvenience, noted Manitoulin Health Centre CEO Derek Graham. “When faced with that travel to take the test, a lot of people just choose not to make that journey,” he said. “But it goes beyond that. Studies have shown that with the closer proximity of that technology, more people on the periphery will get the test. From a health care perspective, it is a great thing and there is good reason to anticipate better clinical outcomes will come of this in the future.”

Both Mr. Thibeault and Mr. Graham noted that the capital fundraising efforts of the special foundation (The Sam Bruno PET Scan Fund) have been outstanding.

Mark Hartman, HSN vice-president of regional cancer services and medical imaging, said the hospital will be seeking proposals for a scanner so it can properly build the space where the PET scanner will be located following the Tuesday, November 8 news conference at which the $4.6 million in capital funding was announced to build the space. The news conference included a surprise announcement that two $500,000 donations from anonymous donors had put the fund to purchase a PET-CT scanner over its $3.5 million goal.

“I am pleased to announce that Sudbury is getting a permanent PET scanner,” said Dr. Eric Hoskins, Minister of Health and Long-Term Care during the funding announcement in Sudbury. “MPP Glenn Thibeault has been a tremendous advocate for equitable access to high quality care in Sudbury and Northeastern Ontario, echoing the voices of his community at Queen’s Park every day. The commitment and generosity of the community in Sudbury is truly inspiring.”

“What great news for our community. I want to recognize the Bruno family for working tirelessly over several years to bring this issue to the forefront,” said Mr. Thibeault during the announcement. “We all know how important it is for patients in the North to have access to a PET scanner locally. By working with Minister Hoskins over the past few months, we have been able to make this a reality.”

The release goes on to note that “improving access to PET scans in Northeastern Ontario is part of the government’s plan to build a better Ontario through its Patients First: Action Plan for Health Care, which is providing patients with faster access to the right care, better home and community care, the information they need to stay healthy and a health care system that’s sustainable for generations to come.”

Before he lost his battle to cancer at 54, Sudbury native and accomplished salesman Sam Bruno lobbied the government for years to make PET scans free. After that success, Mr. Bruno shifted his focus to acquiring a machine for Northeastern Ontario, located in Sudbury. A foundation made up of seven community members: Cheryl Bruno, widow of Mr. Bruno; Frank Bruno, his brother; Lori Bouchard and Mary Hopkin, his sisters; Trisha Moore and Jody Third, step-daughters; Rita Beech, cousin; and Brenda Tessaro, a family friend.

Mr. Thibeault said he was confident that the first patients would be accessing the PET scanner by the end of next year.