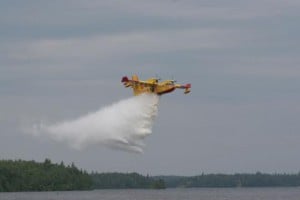 MANITOULIN–Cool temperatures and rainy days this week and weekend has resulted in the Ministry of Natural Resources (MNR) lifting its Northeastern Ontario fire restriction. According to the MNR website, the fire hazard in the Manitoulin region has been downgraded to moderate as of June 1.

Though the MNR has lifted its ban, it urges residents to check with the municipality in which they reside before starting any campfires or bonfires.

Northeast Town fire chief Darren Bailey confirmed that the town lifted its fire ban at the same time as the ministry, but reminded residents that fire bylaws in the Little Current area prevent open flame fires at any time. Fires in Little Current must be in chimineas.

Other than a warning to a resident and a fire the fire department was called to assist with in Sheguiandah First Nation, the period of the ban went without trouble, he confirmed.

Across the Island in Gore Bay, Mike Steele is recommending to the town that it lift its fire ban.

“With the rain we’ve gotten today, (Friday), and the rain we’re forecasted to get this weekend, it’s safe to lift the ban,” the Gore Bay fire chief explained.

There were no fires in Gore Bay that were caused by people disregarding the ban, Mr. Steele said.

John Reid, fire chief for Central Manitoulin, is keeping his eye on the weather.

“We’ve gotten a bit of rain,” he said, “and this looks good. I’ve been thinking about lifting the ban.”

On Thursday, May 31, he told The Expositor he’d need to see rain before he’d make that call, as conditions remained dry.

“The MNR has lifted its ban, but it’s still pretty dry here,” he said, crunching the dry grass underfoot in front of the town hall in Mindemoya, to make his point.

Even though the MNR has lifted its fire ban, fires continue to rage throughout Northeastern Ontario. Twenty new fires were reported between May 31 and June 1, most in the Sudbury area, while two northern fires, Kirkland Lake 8 and Timmins 9 continue to burn. Kirkland Lake 8, which came within three kilometres of the town, is currently listed as under control. The fire is out and the MNR is actively seeking out hot spots to ensure it doesn’t flare up again.

Timmins 9 is still listed as out of control, and the MNR is actively working to establish a perimeter around the nearly 50-kilometre-wide fire.

The only fire the MNR has been called in to assist with on Manitoulin Island was in Meldrum Bay. The fire is currently under investigation by the ministry. A helicopter containing a crew was sent out to put out the fire, and a twin otter plane was sent to assist, but was turned back to help with another off-Island fire.

“Until the investigation is complete, we don’t know if we’ll be going after the cost-collection route,” ministry representative Lindsay Marks told The Expositor.

The MNR cautions people having a camp or bon fire to take precautions to keep the fire from spreading, as conditions are still dry. Fires should be lit in pits clear of combustible materials and there should be no overhanging branches or debris. Don’t light fires on windy days and only have fires during the evening, overnight or early morning hours while the ground is at its dampest. A bucket of water and/or sand should be kept nearby to extinguish the fire, and the fire should be thoroughly drowned before moving on.

If a campfire or bonfire reignites and spreads, the person or persons responsible for it can be held liable for the costs of fighting a fire, which can run into the thousands of dollars.

To find out if there is a municipal-ordered fire ban in your community, contact the town hall.