MANITOWANING— Five years ago musicians Kristi Lane Sinclair and Cris Dersken piled their equipment into a small red hatchback and shoehorned themselves into the remaining space and set out on a tour from Vancouver to Winnipeg. Several gigs and a summer later, the Red Ride Tour began.

“It was amazing, so we decided to do it again and it became an annual thing,” said Ms. Lane Sinclair. As time went on the little red hatchback fell by the wayside, a more “roomy” minivan taking its place, and the lineup of artists wanting to take part has continued to grow.

“It is still a lot of people we know and places that have supported us over the years,” said Ms. Lane Sinclair, “but it really is a very fun and cool thing.”

The Red Ride Tour is definitely more than a little bit funky and eclectic, covering a wide range of genres performing in a variety of venues. Just about every show is a little different.

The Red Ride Tour came to Manitoulin recently and knocked the socks off an appreciative crowd. The artists taking part are aboriginal, a bit of a double entendre on the tour title, but each is highly talented within their respective venues.

Co-founder Kristi Lane Sinclair (on the Vancouver to Montreal leg) began her musical career 17 years ago. A “fierce and feisty, Haida/Cree singer-songwriter,” Ms. Lane Sinclair is part of “a new wave of Canadian indigenous artists who are turning perceptions upside down.”

Raised in the backwaters of British Columbia and “drawing more from a DIY/indie aesthetic than traditional or mainstream music,” Ms. Lane Sinclair’s musical roots haver created a “darkly intoxicating mix of grunge, folk and classical.”

“I would call my work ‘grunge electric’,” she laughed. A two-time Canadian Folk Music Award nominee, Ms. Lane Sinclair’s new album Dark Matter was produced by Derek Miller and was released in Vancouver at the opening date of the tour. There is also a six-part documentary series ‘Face the Music’ that follows the eclectic musician’s journey as she releases her CD and plays the Red Ride Tour. Her work’s best descriptions contain the sobriets of “smokey,” “rich” and “orchestral” with “alternately snarling guitars and warm strings.”

Derek Miller, who is also on the Vancouver to Montreal leg of the tour, is a Mohawk guitarist and singer/songwriter best described as “a journeyman musician with eclectic taste and a knack for roots inflected rock.” Mr. Miller was born on the Six Nations of the Grand River and became interested in music during his early teens—by the late ’90s he had already toured with iconic Canadian vocalist Buffy Sainte-Marie.  A JUNO award winner for his first two albums ‘Music is the Medicine’ in 2002 and ‘The Dirty Looks’ in 2006, he is also a four-time Aboriginal Music Award winner receiving Best Blues Album at the Aboriginal Peoples Choice Music Awards for Blues Vol.1 in 2013. A documentary film about his life on the road, ‘Music is the Medicine,’ had its world premiere at the imagineNATIVE festival in Toronto in 2011. His most recent release (produced by the Smithsonian Institute in Washington, D.C.) is a cover album of songs made famous by Native American musicians called ‘Rumble: A Tribute to Native Music Icons.’ Ranging from The Band’s Robbie Robertson back to the legendary Buffy Saint Marie, there was no shortage of material for that project.

Cris Derksen, who is on the Winnipeg to Montreal leg of the tour, is now a familiar face on Manitoulin having performed at The Repast, the recent Debaj hosting of a three-year National Arts Council project. Ms. Derksen has performed from Norway to Australia and is a Cree cellist and composer. Known for “building layers of sound into captivating performances” her music interweaves “the traditional and contemporary in multiple dimensions, putting to good use her traditional classical training and aboriginal ancestry through new school electronics to create a genre-defying musical experience. Her critically acclaimed debut solo album, The Cusp won the 2011 Canadian Aboriginal Music Award for instrumental album of the year and her third album features what she terms “orchestral powwow” and is due to be released later this year.

The Red Ride Tour moved on to performances in North Bay and then will be performing in Toronto and Montreal before heading off to Brooklyn. 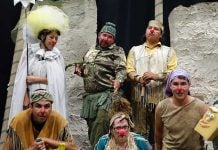 The clowns are coming to the Debaj summer stage