A Wikwemikong lady’s comments, overheard in a Little Current store last Friday, said it all. She was observing that some event had taken place, “the same day the chief died.”

“The chief” she was referring to was Ron Wakegijig who passed away late last week and it is very telling that the title that was accorded to him in a matter of fact way in this conversation was one that he had not held officially for quite some time.

But it is not at all surprising that, at least in this one case, this title had travelled with the late Mr. Wakegijig long after he left elected office. It would be surprising if this one person’s casual reference was not largely shared through Wikwemikong and beyond.

That’s because Chief Wakegijig was either chief or couuncillor at the Wikwemikong council table through parts of four decades.

Because of his political longevity and because of his visionary approach to leadership, Mr. Wakegijig is rightly identified as the man who oversaw Wikwemikong’s entry into the modern era.

Ron Wakegijig was thrust into the leadership position upon the sudden and tragic death of his father, Chief John Wakegijig. This long-serving chief, together with several senior band councilors, were victims of a traffic accident on their way back home to Wikwemikong from meetings in Toronto.

Ron Wakegijig was a young band councillor at that time but acquiesced to the pleadings of not only his colleagues but also of the community and assumed the chief’s role.

And once he had that title, he was reelected as often as he wished. (He did take a few voluntary “time outs” from the demands of the job over the decades.)

Under Chief Wakegijig’s watch, his community established a modern health clinic and negotiated ongoing medical practitioner services to serve the community. The community took charge of its educational requirements, establishing its own board of education and, eventually, its own high school.

The “new” band office (new 30 years ago), the Hub Centre Daycare, negotiating the massive Point Grondine land claim, Rainbow Lodge addictions treatment centre, the Wikwemikong Heritage Organization, the “new” arena (new in 1974)…all of this, plus a great deal more, was accomplished under Ron Wakegijig’s watch and this was a time that also saw him embark on study into traditional healing methods that led to personal growth and becoming part of a network of people sharing these interests from all over the continent.

Ron Wakegijig was part of a team that brought about most of the modern institutions that the people of Wikwemikong enjoy and take for granted today.

He came into Wikwemikong band politics in the late 1960s along with a cadre of similarly motivated friends. Circumstances propelled him into a leadership role, one that he embraced in the spirit of community responsibility.

For two generations of Wikwemikong people, Ron Wakegijig was “the chief” as the lady referenced him last Friday.

And so he will be remembered as a visionary leader who played a very large role in setting in place institutions and positive changes that continue to impact the day-to-day lives of the people of Wikwemikong. 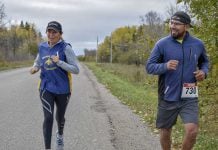