GORE BAY—What was meant to be a quick trip for Richard Peever took a turn for the worse when his plane was buffeted by the wind and ended upside-down during a routine takeoff from the Gore Bay harbour.

“I came in this morning (Friday) at 12:30 for the dedication,” stated Mr. Peever, president of Huron District Contracting in Goderich, which was responsible for the Gore Bay breakwater building project.

“I was preparing to leave north to south (like I had come in) but the winds were gusting around the point, and it caught me under the left wing,” Mr. Peever told The Expositor. “I was heading out far enough to come back into the wind about 1/2 mile out. One gust kind of lifted it a bit and I got that under control but before I could slow down another one got me and the wind tipped across and then it just barrel rolled.”

Thanks to Mr. Peever’s preparedness and clear mind, he escaped unharmed.

“I had my seatbelt on and lifejacket on. I just waited until the water came up and just opened the door.“ 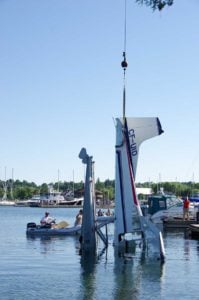 Maurice Bachand and his wife were swimming when they saw the accident.

“All you could see was the tail sticking out of the water,” Mr. Bachand said. “It went down so fast. But there was a guy at the swimming beach that had a dingy sitting right there and he jumped in his dingy and went. And he said by the time he got there the guy was popping out of the water.”

“I had family and friends down at the boat, Hankyspanky,” said Jim Kiviaho. “And (when I saw the plane) I just threw my stuff on the dock and took off running. I used to be a paramedic.” Both Mr. Kiviaho and Norm Foster were two of the first people to reach Mr. Peever.

“By the time I got out and on top they were on their way,” said Mr. Peever.

After determining there were no injuries, Transport Canada was able to release the scene within an hour. But it was another four hours until the plane was completely removed from the lake and back on dry ground. Ron Campbell of Dad’s Sales and Service used his crane to hoist the Cessna 185 Skywagon, letting it drain before righting it.

Mr. Peever said whatever happens next will be up to the insurance company. “We got it out of the water, and there were no oil spills, nothing like that, which was my main concern. And I’ll leave it up to them. Who knows.”