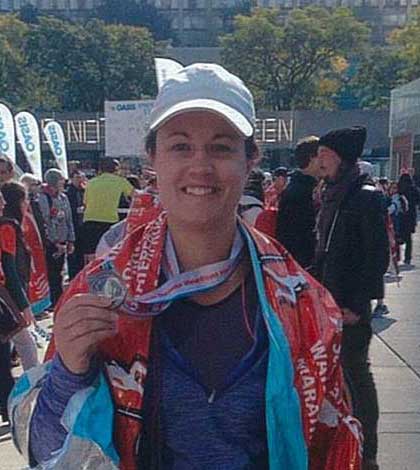 BAY ESTATES—Lyndsay Setterington is walking a little taller these days, as well she should, having completed her first half-marathon late last month. But that’s not all she’s accomplished. Six months ago, Ms. Setterington was a pack-a-day smoker and hadn’t jogged a day in her life since public school.

After being contacted by her proud mother, The Expositor approached the smoker-turned-athlete for an interview at her place of work, the Little Current post office.

“Oh, my mother,” she blushed, but agreed to share her story.

The mother of two explained that she started smoking at age 15 and that everyone in her family, siblings and parents, are smokers.

The 35-year-old tried to quit on a couple of occasions before, but it didn’t stick. Until this past March, that is.

On March 19, she made up her mind that it was time to quit. She had been approached by friend Nancy Curtis about running a half marathon in October but she, a heavy smoker, run 21 kilometres? It sounded impossible…or was it? After thinking hard about it for a week or so, she had her last cigarette one night and bade her habit farewell.

“I talked to it like it was a person,” Ms. Setterington said, explaining how she spoke aloud to the smoke, saying goodbye and telling it (the cigarette) it would no longer have control over her life.

The half marathon, and committing herself to another person, her friend Ms. Curtis, was a major motivating factor, she explained.

“It was hard for the first couple of days,” Ms. Setterington admitted, “but when I look back it was easy.” She said the book ‘The Easy Way to Quit Smoking’ by Allen Carr also proved helpful. While some smokers use aids such as nicotine patches, gum or smoking cessation medications such as Champix, Ms. Setterington chose to quit cold turkey.

After a week or so of getting accustomed to life as a non-smoker, she began to jog. “It was literally one step at a time,” she added.

Using the light post technique (jog the length of one light post to another, walking to the next one and then building up your endurance and adding more and more lamp post distances) Ms. Setterington found her stride. From April to October the young woman ran, gaining strength until she could master 13 kilometres. Remarkably, it wasn’t until the day of the Scotiabank marathon in Toronto that she ran the half-marathon of 21 kilometres.

So what does her family think? “They love it,” Ms. Setterington grins. “My kids are very proud and my husband is very supportive.”

“It’s easier to breathe now and I can keep up with the kids—I enjoy my kids more because I’m not always thinking about a smoke,” she added. “Physically, I just feel so much better, and my butt’s a little tighter too,” she laughed.

Coming from a family of smokers, Ms. Setterington’s hoping she can encourage them to quit too, as well as anyone else who reads her story.

“I have a 10 and an eight-year-old, they’re young and impressionable and I didn’t want them to see me smoke anymore,” she added.

“I realize that I can do a lot more than I thought I could do,” she reflected. “Now I want to do more half marathons, and influence people to quit smoking. If I can quit, anyone can.”

Ms. Setterington’s advice is to take it one day at a time, and keeping yourself busy is important too. If you’re the kind of person who needs the familiar feel of something in your mouth, try gum or carrot or celery sticks, but not junk food, she warns.

“I treated nicotine like a person, like a little devil inside of me,” she added. “Stressful day? You just want to smoke, but that’s not your comfort, your comfort is inside yourself.”

Ms. Setterington plans on running more 10ks in Sudbury and is looking forward to the half marathon in Toronto again next year. 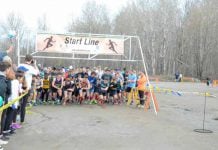