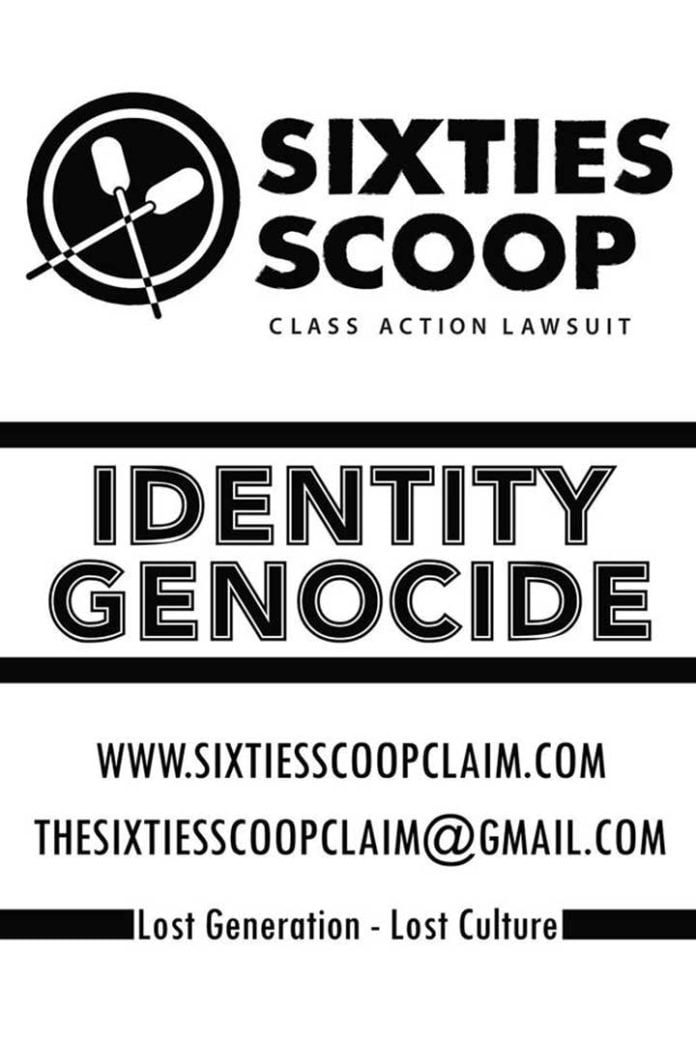 According to Wikipedia, the term Sixties Scoop, “refers to the practice of taking (scooping up) children of aboriginal peoples in Canada from their families for placing in foster homes or adoption beginning in the 1960s and continuing until the late 1980s.” But for those who were wrenched from their families and placed in homes, most in non-aboriginal and even in other provinces or the United States, that definition barely scratches the surface of what they experienced.

The class action lawsuit has been filed against the Government of Canada and alleges that between 1962 and 1996 as a result of a federal-provincial arrangement that saw Ontario child welfare services place as many as 16,000 aboriginal children with non-Native families from December 1965 to December 1984, severing their connections to family, language, culture and community, providing a direct link to major dysfunction for both those individuals, their families and communities.

The lawsuit seeks a settlement of $1.3 billion in damages, or $85,000 for each affected person, for the plaintiffs suffering emotional, psychological and spiritual harm from the lost connection to their aboriginal heritage. Lawyers for the plaintiffs are arguing they have enough evidence to forego a trial and prove that Canada had an obligation in law to ensure that indigenous children removed from their homes retain their cultural identity and heritage. “We, as you know — as a government — would like to get things out of court and to a table where we can make those kinds of agreements together, as a way forward,” Minister Bennett told reporters in Winnipeg in the week before the start of the trial. “We want to work together with all of the litigants that are presently in court and try and get to the table.”

Minister of Indigenous and Northern Affairs Carolyn Bennett is on record as expressing a hope that the Canadian government and the plaintiffs can find an out of court settlement to the case.

Anishinabek Nation Grand Council Chief Patrick Madahbee has a personal experience of the Sixties Scoop, having been removed from his family, the oldest of nine siblings. “I was the luckiest as I went to my biological grandparents,” he recalled. “The next oldest went to my stepfather, the remaining seven were sent all over the place.”

Some of the siblings did not meet again for 30 years.

“The seven sent to various families, three of them wound up in really awful situations,” said Chief Mandahbee. For most of the siblings the loss of language and cultural connections was nearly completely severed. Chief Madahbee himself has had to work diligently over the years in order to learn Ojibwe. “I still have a long way to go,” he admits.

For those who find their way back to their communities, they often wind up adrift, with little or no connections to their families and communities. “I know so many people, when they come back they wind up as lost souls,” said Chief Madahbee.

Some of his siblings “wound up being little more than glorified slaves” when they were placed in foster homes. For many years, both Native and non-Native foster children were something of an industry. Although there were certainly many families that sought to provide good homes and safe havens for children in care, there were plenty who simply sought the monthly cheques and provided very little in the way of physical, let alone emotional support and nourishment to their charges.

“They grew up tough,” said Chief Madahbee, “but they also grew up bitter. A lot of violence came about as a result of that bitterness.” For many, violence became a Saturday night diversion. “There just wasn’t much of anything else to do but to get in fights.”

Many retreated into the solace of drugs and alcohol, and that just made the violence worse. “I was fortunate,” said Chief Madahbee. Eventually, he turned his back on that lifestyle and has not looked back. “It has been about 20 years I haven’t been drinking,” he said.

Chief Madahbee steps away from being cast as a role model, although there are those in his community who have cited him as such. “If I had an impact, I attribute it to my grandmother’s values,” he said. “I was just reflecting what was put onto me.”

But the disconnection that came about from the sundering of his own family in the Sixties Scoop has not been healed. “I probably see about three of them once in a blue moon,” he said. “There are only eight of us left.”

For actor Gloria May Eshkibok the trauma of the loss of her mother at age eight, and her father who was charged with her mother’s death in what Ms. Eshkibok characterized as “the kangaroo court atmosphere at the time” has left lifelong scars and a strong antipathy to the community in which she was placed.

Ms. Eshkibok’s ordeal began in 1969, when “my dad was charged in the murder of my mother,” she recalled. “I couldn’t testify because I was eight at the time.” Her mother’s death came about following a domestic argument between her parents, but to this day Ms. Eshkibok remains convinced that what happened at the time was misconstrued by the court and that her father’s implication in her mother’s death was a miscarriage of justice that would not have happened had he been a middle class white person with access to high priced legal counsel.

The first inkling that she was being sent away from her family came at the feast at the Buzwah community hall following her mother’s funeral, and it was a cruel awakening.

“I remember that there was this white woman with platinum blonde hair who was driving a red convertible who was there, I remember thinking ‘Oh ever nice, even white friends have come to my mother’s funeral’,” she recalled. “The white lady asked me if I would like to go for a ride in her car. What kid wouldn’t want to? But after I was buckled into my seat I saw my grandmother come out with a small suitcase. It was right after the funeral feast.”

She was taken to Gore Bay and placed in the Queen’s Hotel. While her experiences with the family at the hotel were not entirely negative, “although they were very busy with the hotel,” Ms. Eshkibok’s recollection of the reaction to her in the community was not at all positive.

“Why was I taken to such a racist community?” she said.

Ms. Eshkibok suffered from a childhood cancer that left part of her face disfigured, a setback that has not stopped her from enjoying a somewhat storied career as an actress mingling with the likes of Tomson Highway and taking part in the such seminal plays as ‘The Rez Sisters’ and playing an early role in the Debajehmujig Theatre Group (now Debajehmujig Storytellers).

“I remember walking from the hotel to school and the snickering old men,” she said. The racism she said that she encountered on the street came as a terrible shock, even though it was far more common to see racist comments and actions overtly expressed in those days. “I had known white people all my life, from the days when I had surgery and when I went to Sick Kids every year.” Those experiences did not prepare her for what she faced as a scared, lonely eight-year-old Native girl. “How could people be so hateful to a little kid?” she asked.

What she met on the streets for that one school year could have set her on a path of anger and hatred, and in fact it did colour her views for many years. Her saving grace, what kept Ms. Eshkibok from walking down a dark path, was becoming part of the theatre and her experiences working at the Anchor Inn Hotel in her teenage years, where she made connections with the theatre crowd and met people like the playwright Tomson Highway and Debaj’s Larry Lewis.

When she returned to her own community of Wikwemikong, Ms. Eshkibok found many of her family connections were damaged and she had a difficult time connecting.

“The official story (as told to her) was that my father was in the hospital,” she recalled. But as a young rebellious teenager she recalled using her father’s conviction for her mother’s murder as a weapon when she was angry at him, something she now regrets when she reflects back to those arguments.

Her father never truly recovered from his experience and the guilt that was placed upon him. “He hid himself in drink,” she said. Unable to cope with her family life, Ms. Eshkibok fled to Toronto to become an artist. But despite the disconnections, there were some solid events in her life in Wikwemikong that led to rich experiences later in her life, particularly when it comes to the church.

“My dad was not much for expressing emotions,” she said. “Whenever I needed a hug, dad would say ‘go to church’.” It was at church that she learned to sing the old hymns in Anishinabe, something that would lead to her creation of the ‘Magnificate Opera,’ a collection of Anishinabemowin hymns.

Both Ms. Eshkibok and Chief Madahbee say that ultimately, their experience of the Sixties Scoop was at the lesser end of the negative scale, although it was to have a disproportionate impact on the rest of their lives, they were able to accomplish remarkable things with their lives. But that success came with a large cost.

Ms. Eshkibok spent many years in psychotherapy, learning the tools that she uses today to transcend the negativity in her life. She credits people in her community, such as the late Kitty Bell who taught her a lot of the culture that she had lost and people like the very much alive Bea Shawanda who taught her to believe in herself.

“When white people shoot you down, you start believing it,” she said. “I am glad I became involved in the theatre, it saved my life.”

“We are a resilient people,” noted Chief Madahbee, but added that the Anishinabe are also ultimately human beings and the impacts of the residential school system and the related Sixties Scoop are generational and repairing the damage will not be a quick fix.