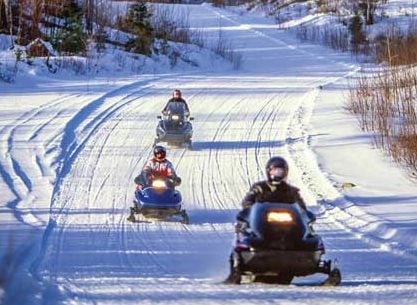 MANITOULIN—This winter (the past weekend excluded) has been a snowmobiler’s dream come true. With Manitoulin receiving plenty of the white stuff by December’s end—more than has been seen in some time—the Manitoulin Snowdusters Snowmobile Club is pleased to report that all of the Island’s Ontario Federation of Snowmobile Club’s (OFSC) trails are officially open for business (for those with a permit).

The Expositor spoke with Snowdusters’ board member Brad Middleton last week. He announced that the stake line from Little Current to Killarney was also in place, meaning that for the earliest time in recent memory, snowmobilers can now make the relatively quick trip to Killarney via the ice thanks to the frigid temperatures of late and safe ice conditions. These conditions, of course, are subject to change and riders are reminded that the ice run is staked on a volunteer basis and is use-at-your-own-risk.

The stake line running from Little Current to Spanish is not yet in, but the Snowdusters anticipate that this will occur shortly, however West End sled heads can look forward to the ice trail being officially open from Gore Bay to Spanish this week.

Mr. Middleton said he doubted that the warm weekend weather would adversely hurt the picket lines.

He noted for snowmobilers who wish to make the trek to Drummond Island that the state of Michigan is no longer accepting OFSC permits, whereas they once did.

There have been a few trail changes this year too, he advised.

In Providence Bay, a large parcel of land has been removed from service. This factor, along with the fact that there are no longer any restaurants in operation in the winter, nor gas stations with the closing of Denovan’s Garage, made it so the new trail skirts around Providence Bay’s perimeter.

“But the good news is that we found a route,” Mr. Middleton said.

A large tract of land was also lost in Evansville two years ago, but this has since been remedied.

“The new Bell Road bypass is now in place,” Mr. Middleton explained. “You no longer go to Murphy’s Harbour/Mac’s Bay.”

Many have been wondering how the current McLean’s Mountain wind farm construction project has affected trail use, as the main C107D trail passes through the heart of the construction area.

“The wind farm construction is definitely causing disruptions with the normal flow of operations this season on the main trail from Little Current to Honora Bay,” he responded, noting a warning that the destination signs are currently not up, and that the trail is currently classed as ‘limited use/caution.’

“The contractor closed the key part—the normal trail from the 20th Sideroad to Honora, but from the Green Bush to Honora we made an alternate route that will probably be used for the rest of the winter.”

Mr. Middleton did say that White Construction, the wind farm project lead, did give assurances to the Manitoulin Snowdusters that upon completion “the trail will be better than ever before.”

All of the trails have seen the groomer at least once as of press time Monday, with the main trails being groomed as many as three times.

“The conditions right now are quite good,” Mr. Middleton said, adding that permit sales are the best the club has seen in a number of years.

And if this weather keeps up, Mr. Middleton said he’s hoping Manitoulin will see resurgence in his favourite of winter sports.

All snowmobilers hoping to head out on OFSC trails must do so with valid snowmobile insurance as well as an OFSC trail permit and should always drive with care.

Trail permits can be purchased at the following Island businesses: Allen’s Automotive and Highway 6 Service Centre in Little Current, BJ’s/OK Tire in M’Chigeeng, Buie’s in Spring Bay, Fogals in Gore Bay, Rylan’s Clothing in Mindemoya and Allen’s Automotive in Manitowaning.