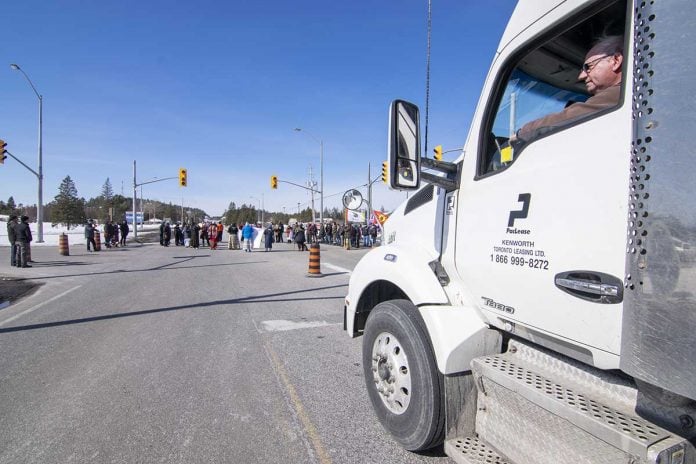 MCKERROW – Dozens of supporters joined the rolling road blockages in McKerrow this past Saturday afternoon for a peaceful solidarity protest in support of the Wet’suwet’en hereditary chiefs who are opposed to a liquefied natural gas (LNG) pipeline on their traditional unceded territory, the closest solidarity protest to Manitoulin Island for this issue that has sparked disruptions nationwide.

“I’m here for the people, the water and the Earth. We need to take care of her; she needs our help right now,” said Marjorie Beaudry, one of the organizers of the rally. She has previously joined Idle No More protests and organized a protest against children’s aid societies after two of her grandchildren died within their care.

He said he had seen numerous other communities in Canada and abroad staging solidarity events which is what motivated him.

The protest involved 15-minute traffic stoppages at the top of the hour. Protestors came with signs and flags, led prayers, smudged and hosted a round dance. Spirit Bear and a women’s group of hand drummers offered support.

As might be expected, reactions from drivers and passengers was mixed. Although many offered supportive honks and waves, several others made a thumbs-down gesture from their passing cars or chose to extend a different finger.

A transport truck driver caught in the blockade complained that fossil fuels are what power the developed world and that the protesters’ clothes and cars would not be possible without the use of these energy sources.

Mr. Kaboni later responded to that by saying the use of fossil fuels is a modern reality that does not have to be the only way of running the world.

He added that he has well wishes for those expressing negative remarks, such as those advocating for violence in online comment sections.

“I pray for those people too and their negative comments and their remarks, that they realize what they said is wrong … they’ll be happier for their children, and their children’s children.”

Some of the protesters were not members of area First Nations.

“A lot of us immigrants, we are Indigenous peoples ourselves and our struggles connect with the struggles of people on Turtle Island. Especially with resource extraction, exploitation of our lands, people seizing and taking away our lands, that’s what is displacing a lot of us. It’s really important for me to stand with Indigenous people here and show that we will always support them,” said Farah Mint Aqit, who now lives in Northern Ontario and is a supporter of the Revolutionary Communist Party of Canada. Her heritage is from the Sahel region of Africa.

Members of the British Columbian, Canadian and Wet’suwet’en governments met and reached a tentative agreement on March 1, a deal that is reported to address some of the key questions about governance on their unceded territory. The full details of the text have not been made public so Wet’suwet’en people can review it and decide whether or not to accept the proposal.

Wiikwemkoong chief and council issued a letter in the week before the protest stating that it was in support of the peaceful assembly of its members. The Expositor contacted Ogimaa Duke Peltier for comment in the days following the protest but he was unable to offer comment by press time Monday.

What’s behind the disruptions?

Many people in the Wet’suwet’en nation are supportive of the Coastal GasLink pipeline and have consented to its construction in exchange for benefits agreements. At the same time, many members of the nation are strongly opposed to it.

A vast majority of on-reserve band councils support the project while hereditary chiefs—a pre-colonial governance structure that has existed for centuries on these lands—are largely opposed. The elected band councils represent the Indian Act-designated reserves while the hereditary chiefs have jurisdiction over the remaining Wet’suwet’en unceded territory, a much larger area.

Key to the issue at hand is who should hold decision-making power in these circumstances. A 1997 Supreme Court of Canada case recognized the existence of hereditary chiefs and that they should have certain powers over their lands, but until now the details about the balance of power between the two systems have never been officially set.

Some observers argue that this is the true heart of the dispute, which reflects the reported nature of the proposed agreement between the Canadian and BC governments and Wet’suwet’en people.

On the matter of the pipeline itself, many Wet’suwet’en members are in favour of the project because of the millions of dollars in economic benefits it will deliver to the communities in its construction, as well as ongoing benefits agreements after it is built.

People on both sides of the dispute have raised concerns that the protests have gone away from their original intent, with some claiming that non-Indigenous anti-pipeline activists have become a dominant voice over the individuals who will be directly impacted by the pipeline.

Pipeline proponents often use the argument that natural gas is far cleaner than coal, and these fuels will reduce China’s reliance on coal for power generation (China is expected to be a key customer of Coastal GasLink).

While LNG does burn cleaner, the LNG that will flow through this pipeline will be extracted from the earth using hydraulic fracturing (fracking). Fracking results in mass amounts of methane emissions during its production and methane is at least 25 times more potent as a greenhouse gas than carbon dioxide.

Ms. Beaudry said environment-focused protests, which became one of the main themes of this solidarity rally, would have multi-generational impacts.

“I’m probably saving your life. You need water, everybody needs air. That is such basic science … I’m doing this for you, too,” said Ms. Beaudry. “That’s the reason why we’re here is because of the pipeline.”

Mr. Kaboni said the current political climate, in his view, was reminiscent of historical treatment of Indigenous peoples.

“They’re trying to kill off the Indian all over again. This happened 100 years ago and it’s happening all over again. Us as Native people, we all see this so we (protest) to show we’re not going anywhere,” said Mr. Kaboni.

Although solidarity protests have highlighted the divides that exist across Canada, at their core they are demonstrative of the split that exists within the Wet’suwet’en Nation itself. Because the core issue at hand surrounds their internal governance structure and the proposed federal and provincial agreement is about that very topic, several members of the Wet’suwet’en Nation are calling for a pause in these solidarity protests, saying they are harming the negotiation abilities of those directly involved in the debate.

There are no further disruptions in the Manitoulin Island area scheduled at this time.