ONTARIO – Three Island species have been added to Ontario’s species at risk list by COSSARO, the independent Committee on the Status of Species at Risk in Ontario, that considers which plants and animals should be assessed as at risk in Ontario. A total of 15 species were added in the 2019-2020 report, which was released last month. Two lake whitefish sub-species from Como Lake (near Chapleau) were marked as extinct and the red-headed woodpecker was elevated from special concern to endangered. Two additional species were down listed from threatened.

Species at risk in Ontario are classified in one of four categories. A species is assessed as extirpated when it is locally extinct in one area but still lives somewhere else in the world. A species is endangered when it lives in the wild in Ontario but faces imminent extinction or extirpation. A threatened species is found living in the wild and while not endangered, is likely to become endangered if steps are not taken to address threats. Finally, a species is classified as ‘special concern’ when it is not endangered or threatened but may become so due to a combination of biological traits and identified threats.

Many of the species assessed are located in the Carolinian forest region of southern or southwestern Ontario but several have a unique connection with Manitoulin Island. Gillman’s goldenrod, for example, is endemic to the Great Lakes. The yellow flowered perennial is only found in open Great Lakes sand dunes with sparse vegetation and patches of bare sand, mostly on the shores of Lake Michigan and northern Lake Huron in Wisconsin, Michigan, Indiana and Ontario. The plant only currently occurs in Ontario on Great Duck Island.

According to the COSSARO report, there once was a sub-population of Gillman’s goldenrod at Dean’s Bay on Manitoulin Island but it was extirpated before 2000.

Gillman’s goldenrod was also added to the Committee on the Status of Endangered Wildlife in Canada (COSEWIC) list in September 2020. COSEWIC is the federal panel that assesses species at risk of extinction. It was first created in 1977 and reports to the Minister of Environment and Climate Change Canada. COSEWIC is currently an independent advisory body designated under Canada’s Species at Risk Act (SARA). Gillman’s goldenrod is listed as endangered under COSEWIC. “This perennial plant species is a Great Lakes endemic now found in Canada only on one island off the south shore of Manitoulin Island in Lake Huron. The species is threatened by habitat disturbance caused by invasive plants.”

The red-tailed leafhopper is another species whose Ontario population occurs entirely on Manitoulin Island and adjacent islands. Because it feeds exclusively on prairie dropseed and cannot fly, the red-tailed leafhopper has limited habitat options. COSEWOC (2019) recognized two designated units (DU) for this species, one of which is the Manitoulin population, called the Great Lakes Plains DU. According to COSSARO, the Great Lakes Plains DU is “a relic population from a previous expansion of prairie habitat during the Hypisithermal period (5,000 to 8,000 years ago) and is currently known from 19 locations on Manitoulin and other Lake Huron islands. It is threatened by habitat loss from a variety of causes.”

The red-tailed leafhopper has been assessed by COSSARO as being of special concern, “based on the potential of decline of the small range caused by various threats, and Ontario’s conservation responsibility for the Great Lakes Plain population.” The status is consistent with COSEWIC (2019).

Black ash was assessed as endangered in Ontario based on projected declines in total numbers over the next 100 years or two generations. Not only is 53 percent of the Ontario range currently considered susceptible to the emerald ash borer, but 78 to nearly 100 percent of the Ontario range could be affected during that time period due to climate change. COSSARO reports indicate a predicted mortality of black ash exceeding 90 percent in areas affected by the emerald ash borer.

Black ash is a medium-sized hardwood tree endemic to all of Ontario except the far north. It occurs in swamps, bogs and other wetland areas and has long been used by Indigenous peoples for basket making. The bark of the black ash was used to make baskets for berries.

The species is still relatively common throughout Ontario but there have been significant population declines in areas affected by the emerald ash borer. The species was assessed by COSEWIC (2018) as threatened, however, it is considered threatened in Ontario because of Ontario’s “significant conservation responsibility and the specie’s declining status in the broader biologically relevant range.”

Ontario’s conservation responsibility is deemed to be significant based on the fact that the species is globally at risk (IUCN 2017) and more than 25 percent of the global range is located in Ontario.

The red-headed woodpecker is native to eastern North America. In Ontario, it is mainly found south of the Canadian Shield, with the exception of a small population in the northwestern Ontario area of Rainy River. This woodpecker nests in cavities in standing dead trees and is mainly found in open deciduous forests across its range. A red-headed woodpecker population previously found on Manitoulin Island disappeared following pesticide use in the mid-twentieth century.

COSSARO submits a report to the Minister of the Environment, Conservation and Parks in January of each year. The report includes the classification of each species assessed. The committee may submit a report classifying a species at any time in addition to the annual reporting requirement. Committee decisions are posted on COSSARO’s website following presentation to the ministry.

The ministry must amend the Species at Risk in Ontario (SARO) list regulation within 12 months of receipt of the report. Once the regulation has been changed the species is protected based on its classification.

Individuals may submit written information on a species being obsessed. The list of plants and animals that will be considered at COSSARO’s next meeting is available on its website (cossaroagency.ca) under Upcoming Species Assessments. The public is welcome to observe the species assessment discussions at COSSARO meetings and meetings do include an open session for presentations by interested stakeholders or members of the public on the species to be assessed. 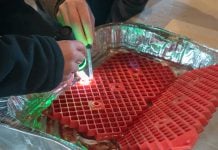