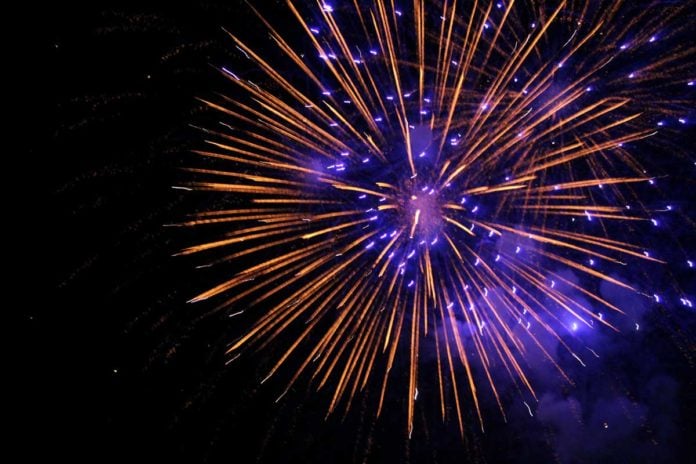 GORE BAY – No truer words were spoken than by one of the many people in attendance at the Gore Bay Fire Department fireworks display in Gore Bay this past Saturday evening.

“That was pretty spectacular,” was the comment this reporter overheard at the conclusion of the fireworks display.

It is safe to say that these fireworks, and the meaning and reason behind it taking place, made this the best held in town in recent memory.

The fireworks display included a dedication to the men and women of the Manitoulin Island law enforcement and a special tribute to the late Ontario Provincial Police (OPP) Constable Marc Hovingh.

Just prior to the fireworks starting Thomas Carrique, Commissioner of the Ontario Provincial Police, nailed it on the head when he said, “this is going to be a spectacular tribute to a man who was truly a hero in life who served his community. And the amount of respect and support that has been given to Lianne and her family by the community has been heartwarming.”

“And the amount of time, care and thought that has been put in by the Gore Bay Fire Department services team has gone beyond words,” added Commissioner Carrique.

As part of the fireworks display there was a tribute to the OPP men and women in the colours of blue and gold, and there was an added special tribute in memory of Constable Hovingh. Prior to the final tribute, local bagpipers Dave Beaton and Iain McGale played ‘Amazing Grace’ on the town docks.

Gore Bay firefighter Duncan Sinclair, who acknowledged the help that Brad MacKay had in helping the fire department members put on the fireworks told The Expositor previously, “as firefighters, we are always hailed as the heroes saving someone’s house or baby, but in the case of the police they are not usually recognized as heroes. Maybe this needs to change. We want them to know how very much they are appreciated.”

It was with this in mind that Mr. Sinclair brought forward the idea of having a tribute at the fireworks. He brought the idea to fellow firefighter John Baker and Fire Chief Mike Addison and they both loved the idea. From there, Mr. Sinclair took the idea to John Robertson of the OPP, who liked the idea as well.

Mr. Sinclair then contacted Constable Hovingh’s wife Lianne to make sure she was okay with the tribute taking place. “She loved the idea as well and said she would be happy with anything that helps to keep Marc’s memory alive.”

Members of the Hovingh family were in attendance as were members representing all police services on Manitoulin Island including the OPP, UCCM Anishnaabe Police Services and Wikwemikong Tribal Police Services.